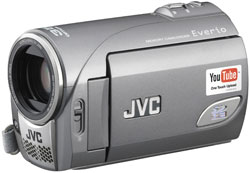 Sharing videos over the Internet is now easier than ever with the launch of a new JVC camcorder that provides one-button uploading to YouTube™, the leading online video community that allows people to discover, watch and share originally created videos.

The new JVC Everio S Series memory camcorder, the GZ-MS100, was designed to make sharing simple for the millions of people who enjoy sharing their videos with the world over the Internet. And unlike many of the other camcorders that target Internet users, JVC’s GZ-MS100 provides an impressive array of full-fledged camcorder features that give it the versatility to do more than shoot short Internet videos.

It looks strikingly similar to the popular Everio G Series camcorders, but is smaller and weighs only 0.60 lbs. including battery, because it records to an SD Card (user provided) instead of a built-in hard disk drive. The ever-increasing capacity and affordability of new SD Cards appearing on the market means that over time Everio S will be able to offer expanded recording time at a lower per minute cost.

One-Touch Upload to YouTube™ on the Internet
Once the provided CyberLink software is installed on a Windows PC, uploading video clips to YouTube™ is quick and easy. The camcorder has an UPLOAD button that works in two ways. In the camera mode, press UPLOAD and then the trigger, and this limits recordings to 10 minutes in length, which matches the YouTube™ file size limit. This eliminates the need to manually time recordings or go back to edit and shorten footage. After recording is done, connect the GZ-MS100 to a PC via a USB cable and press the UPLOAD button. This automatically launches the supplied application for uploading to YouTube™. After just a few mouse clicks the video will be up on the Internet for everybody to see. The original video quality is maintained in the camera, so it can be used for any other purpose.

Easy DVD Burning
For storage and cataloging, recorded videos can easily be transferred to a PC via USB2.0 or directly using the SD Card. The provided CyberLink application also allows easy burning to DVD using the computer’s optical disc drive. Or, to create DVDs without using a computer JVC offers the CU-VD3 Everio SHARE STATION as an option. Since it was designed as an Everio companion, this DVD burner accommodates Everio’s USB Host function that allows scene playback order to be rearranged within the camera before transfer.

User-Friendly Design
The GZ-MS100 features Laser Touch Operation, first offered in the Everio G Series camcorders released earlier this year. The feature’s scroll bar and buttons are touch-sensitive so the user just glides a finger up or down the bar to choose menu items while its blue light follows the movements. The LCD screen itself is never touched, so it won’t get dirty, smudged or covered in fingerprints. The 2.7-inch LCD screen, the same one used on Everio G series models, has Auto Backlight Control to automatically adjust brightness for comfortable viewing indoors or outdoors. And with Auto Power ON/OFF, the user simply opens up the LCD to power-on and start shooting (takes only about one second if Quick Restart mode is engaged), and closes the LCD to shut the power off and avoid draining the battery. The shape of the camcorder itself facilitates ease of use, with a contoured grip that snugly and securely fits the palm of the hand.