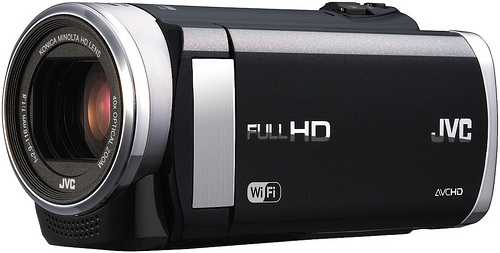 For 2012, JVC announced seven Everio HD camcorders, four of which include built-in Wi-Fi that allow video clips and still images to be emailed, wireless transfer of files to smartphones, and a range of other functions. A free app for an Android device or iPhone/iPad makes it easy to wirelessly transfer video and stills to a smartphone for quick sharing via the internet. It also allows the phone to be used as a remote control for the Everio and offers geotagging of video and photo files in conjunction with the smartphone’s GPS. Video Email allows 15-second video clips (640 x 360 pixels) to be sent directly from the Everio to up to eight email addresses. Live Monitoring allows real time monitoring on a smartphone or computer of images taken with the Everio. And Auto Photo Email automatically emails stills taken using Everio’s movement detection function to a computer or smartphone.

All new Everio camcorders record in 1920 x 1080 Full HD based on the AVCHD format, and offer high quality recording in UXP mode with a 24 Mbps sampling rate. Also, all models offer HDMI output for superior results when viewing on the latest large-screen TVs.

In an industry-first, all camcorders offer a mobile user guide that can be accessed by directly inputing the URL or by using a smartphone to read the QR code displayed in Everio’s LCD screen. The site has been optimized for smartphone viewing so that it’s easy to read and learn how to use various recording functions, access a troubleshooting guide, or refer to instructions on playback and deleting content, in a choice of English, Spanish or French.

Everio E/EX series models offer basic point-and-shoot simplicity as well as a number of helpful features. Using either of the two EX models, even beginners can shoot excellent videos with the help of Smile Meter, which shows how big a smile is in percentage points, Smile Shot, which automatically takes a digital still when it detects a great smile, and Pet Shot, which automatically shoots stills when a dog or cat faces the camera. Various animation effects, such as ribbons and glasses that correctly superimpose onto people’s faces, and handwritten titles, can be added to decorate any shot. The KONICA MINOLTA HD LENS assures high quality images, while a 40x Optical Zoom enables close-up shots from far away, with no sacrifice in optical quality. Advanced Image Stabilizer effectively counters camera shake. Another new feature for 2012 is a zoom microphone that changes the focal point to match the picture so that what’s seen can be more clearly heard. There’s even a Silent Mode that lets the user mute camcorder sounds and darken the LCD for those times when unobtrusive recording is advised, such as when recording school plays or lectures. A Windows application to support image management, simple editing and easy sharing is supplied. 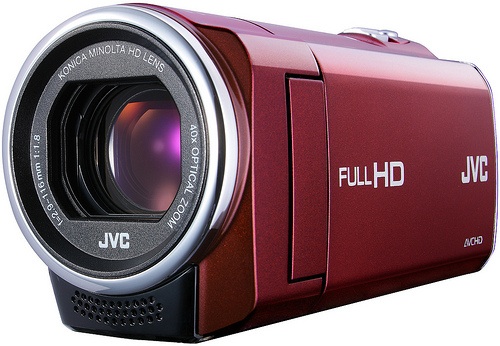 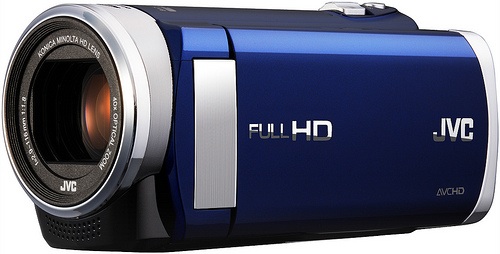 The Everio V/VX series features an unconventional design, with flat surfaces and high grade materials such as the aluminum panel LCD door and front end. Super LoLux with an F1.2 lens assures high quality recording even in dim environments. To the substantial feature mix of the E/EX series, V/VX adds Hi-Speed Recording and Super Slow to slow down movement to one-fifth its original speed, and Motor Drive for rapid-fire capture of digital stills. Image stability is doubly assured with both Advanced Image Stabilizer and Optical Image Stabilizer. 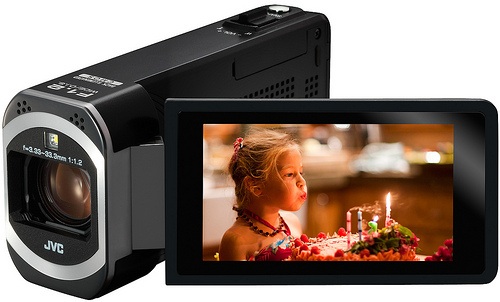 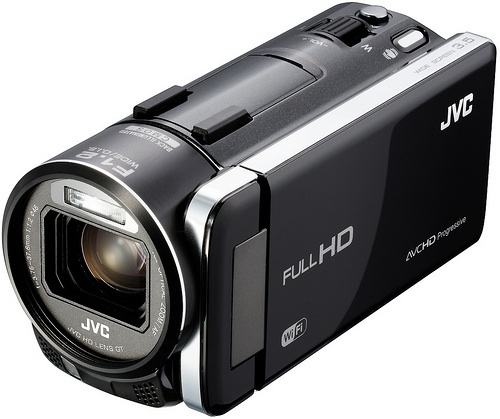