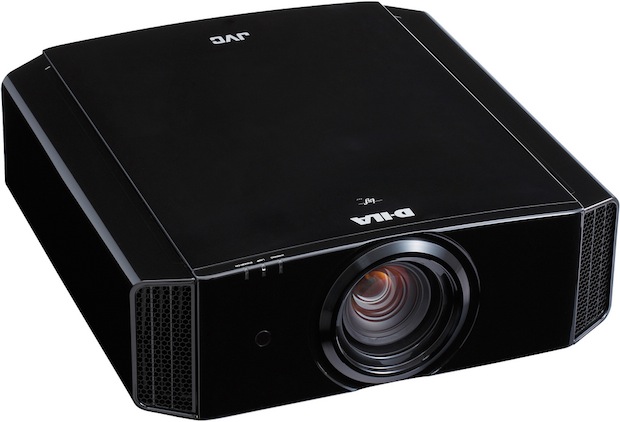 The new projectors are the Reference Series DLA-RS60, DLA-RS50 and DLA-RS40, to be marketed by JVC's Professional Products Group, and the Procision Series DLA-X9, DLA-X7 and DLA-X3, to be available through JVC's Consumer Electronics Group.

For 3D content, each projector includes two HDMI 1.4a ports and supports side-by-side (broadcast), frame series (Blu-ray), and above-below 3D transmissions. An external 3D Signal Emitter (PK-EM1) syncs the projected image with JVC's Active Shutter 3D Glasses (PK-AG1). The external 3D signal emitter ensures solid signal transmission to the 3D glasses for a superior 3D experience, no matter what type of screen is used or how the home theater has been configured.

The new flagship projectors, the DLA-RS60 and DLA-X9, are built using hand-selected, hand-tested components and provide a 100,000:1 native contrast ratio. For 3D display, both models come with two pairs of 3D glasses along with a PK-EM1 3D Signal Emitter. Both projectors also have a three-year warranty.

“No other three-chip projectors in the home theater market can match the amazing 100,000:1 native contrast ratio of the DLA-RS60 or DLA-X9,” said Klasmeier. “JVC's contrast ratio numbers are not artificially inflated by electronic circuitry or a dynamic iris, so every frame consistently and faithfully reproduces peak whites and deep blacks.”

The four top models — DLA-X7/DLA-RS50 and DLA-X9/DLA-RS60 — have been designed to achieve THX® certification and are in the process of being tested by THX.

These same four models also include a new seven-axis color management system (R, G, B, C, M, Y and orange) that allows precise color tuning, especially in skin tones, and a choice of color profiles, including Adobe RGB, DCI and sRGB/HDTV. They have also been designed for ISF certification and will include an ISF C3 mode for professional calibration. Ninety-nine screen correction modes help to maximize viewing environments.

The new JVC D-ILA projectors will be available in late November at the following prices: