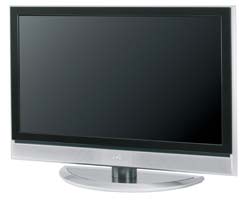 JVC’s top-end LCD series includes the LT-26X776, LT-32X776, LT-37X776 and the LT-40X776, all based on a 1366 x 768 WXGA panel. Each includes a built-in ATSC tuner and CableCARD capability, which eliminates the need for a separate set-top box; HDMI input for a simple, one-wire digital and audio connection; dual IEEE 1394 inputs for connection to a video camera or other device; and a fully illuminated universal remote control for easy operation in a darkened room. The 40-inch LT-40X776 adds a memory card slot to view images captured from a digital camera.

All four sets feature the company’s fourth generation Digital Image Scaling Technology (D.I.S.T.) that upconverts any video source to 770p and GENESSA, a new 32-bit CPU dedicated to controlling picture refinement. These proprietary technologies work in tandem to optimize image quality, regardless of the source and to deliver a smooth picture while enhancing vertical resolution. Another exclusive is JVC’s Five-Point Color Management that samples red, green, blue, yellow and flesh tones and adjusts each separately to delivers vivid color reproduction.

“JVC’s devotion to innovation, especially image quality has garnered the company industry accolades, most recently for our HD-ILA line of LCoS-based rear-projection micro displays,” said Dan McCarron, National Product Manager, Consumer Display Division, JVC Company of America. “As popularity of LCD televisions continues to surge JVC is offering a wide range of screen sizes and features to meet heavy consumer demand. Our 720p line of LCDs packs an array of new technologies that give JVC’s customers one of the sharpest, most vivid pictures available at a great value.”

Pricing is as follows: