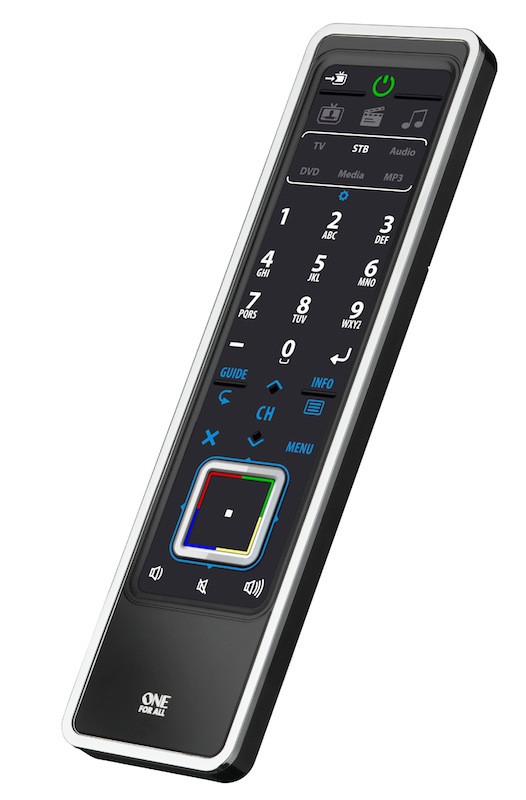 One For All introduced its new Infinity universal remote control range with ‘Smart Screen’ which shows you only the keys you need. Beautiful in either snowy white or jet black with sophisticated silver detailing, using a remote has never been so stylish… or easy!

The Infinity universal remote control works with virtually all home entertainment equipment. It can control up to six different devices including the latest HD TVs, your Satellite or Cable receiver, DVDs and Blu-Ray players — as well as your console or media player such as an Xbox 360, Apple TV or iPod audio dock.

The Infinity is the world’s only universal remote control with Smart Screen — a revolutionary user interface that adjusts to the activity you want it to control. There are no buttons to press — instead the keys you need light up on the large 5.9” fingerprint-proof Smart Screen. The screen provides crystal clear contrast with crisp icons and multi-colors to create clear key groups. And unlike touch screens it is shock resistant and provides clear “click” feedback so you always know where to press.

Hit ‘TV’ and it automatically groups together the most commonly used functions for operating your TV, making it far easier to use than multi-button remotes. There are three Smart Control modes – Watch TV, Watch Movie and Listen to Music. This provides you with complete ease-of-use as the Smart Screen will combine the keys of the different devices you want to control in one overview. And for ultimate ease-of-use, just flip it over and the INFINITY remote turns your devices off without having to press any buttons.

The Infinity remote is compatible with more than 300,000 home entertainment devices covering over 6,000 brands. For the most commonly used brands, the remote comes pre-programmed and can be set up in less than a minute. You can also access SimpleSet.com and download any code you require – now or in the future. As the world’s most comprehensive code database, this guarantees that the INFINITY will never become obsolete. To log on to SimpleSet.com, no software or registration is required. As it is cloud-based it can be accessed from any Mac or PC using browsers such as Firefox, Google, Chrome, Safari and Internet Explorer.

Pricing and Availability
The One For All Infinity will will be available April 2013 in Europe for €99 or £89.99.