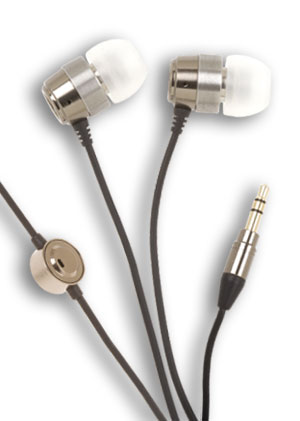 According to research by the Consumer Electronics Association (CEA)1, consumer electronics enthusiasts are excited for the holiday season. Consumer electronics continue to top holiday wish lists, with nearly 80% of adults and 84% of teens desiring the latest technology. Just in time for the shopping season, iharmonix’s high-fidelity stereo earphones offer iPhone™, BlackBerry, iPod and MP3 owners an affordable, sleek and quality option for enjoying their favorite tunes and holding phone calls.

The Platinum Series consists of three models. The i-Series for iPhone 3G and BlackBerry users has an in-line microphone for voice calls and features a multi-function button to send and end phone calls, as well as pause music. The ev-Series model offers an in-line volume control for iPod and MP3 player owners. The e-Series is a streamlined version without in-line controls. The 11mm drivers and neodymium magnets in all three products provide dynamic sound and bass, and the brushed stainless steel front housing and polished gun-metal alloy rear casing offer a sleek and sophisticated appearance.

The Style FX Series comes in two stylish offerings: the i-Series for iPhone 3G and BlackBerry smartphones and the e-Series for iPod and MP3 players. This product line delivers a high performance sound and is housed in a stylish white casing, with a price point appealing to teens and young adults.

“We are excited to launch the iharmonix brand, and our goal is to offer consumers a line of high-fidelity stereo earphones at an affordable price,” said Ezra Soumekh, CEO of iharmonix. “With our Platinum and Style FX Series, we are filling the price gap by bringing the best quality listening experience to consumers.”

All five earphones are available immediately online at www.iharmonix.com and have the following MSRPs:

Additionally, iharmonix will have another product announcement at the 2009 International CES on January 8-11, 2009 in Las Vegas. If attending the show, please visit iharmonix at booth #36929 in the South Hall for more information.

About iharmonix
iharmonix is a division of Paramount Wireless Inc., a privately-held wireless accessory company founded in 2002 and based in Los Angeles. iharmonix entered the MP3 audio space in 2008 with a goal of introducing earphone designs that utilize cutting-edge materials and finishes while maintaining style and ergonomic comfort. Most importantly, iharmonix’s earphones are engineered to deliver the ultimate in dynamic sound accuracy. The company’s philosophy is to enhance the listening experience by changing the perception of how consumers distinguish between price and sound performance.