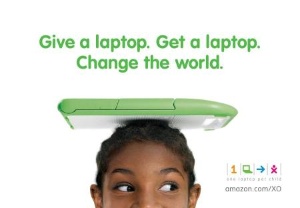 The recent U.S. election has shown that ordinary citizens coming together can change the status quo. Now is the time to harness that goodwill and help the children of the developing world who have been left behind. Some of the world’s poorest countries spend less than $20 a year on children’s education and one in three children won’t complete fifth grade. Participation in One Laptop per Child’s Give 1 Get 1 program will help bring a modern education to these children and empower them to build a better future for themselves and their families and their communities and societies.

One Laptop per Child (OLPC) is a nonprofit whose mission is to provide laptop computers that are sufficiently affordable and connected to the Internet to every child in the world. OLPC first launched Give 1 Get 1 in 2007, raising more than $35 million to fund the delivery of tens of thousands of laptops to children in countries such as Afghanistan, Iraq, Lebanon, Cambodia, Ethiopia, Haiti, Mongolia and Rwanda. To date, OLPC has distributed more than 500,000 XO laptops in 31 countries and is on its way to delivering one million laptops by the end of 2008.

“The phenomenal success of last year’s Give 1 Get 1 program created tremendous demand from both the public who wanted to give more and from countries that saw an opportunity to attack poverty through education,” said Nicholas Negroponte, founder and chairman of One Laptop per Child. “Renewing the program now will help us scale existing deployments and expand into many other countries as well.”

How to participate in Give 1 Get 1

In order to participate:

Corporations and other organizations can also encourage their employees to participate by setting up matching donations. For example, Google (GOOG) and SWIFT (Society for Worldwide Interbank Financial Telecommunications) have pledged to match and double employees’ donations, turning Give 1 Get 1 into Give 2 and Give 3 programs, respectively.

To learn more about the XO laptop itself, go to http://www.laptop.org.

About One Laptop per Child
One Laptop per Child (OLPC at http://www.laptop.org) is a non-profit organization created by Nicholas Negroponte and others from the MIT Media Lab to design, manufacture and distribute laptop computers that are sufficiently inexpensive to provide every child in the world access to knowledge and modern forms of education. XO laptops are rugged, open source, and so energy efficient that they can be powered by a child manually. Mesh networking gives many machines Internet access from one connection.