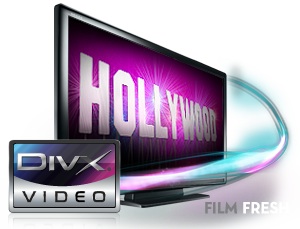 DivX, Inc., a digital media company, and Film Fresh Inc. today announced that Film Fresh is the first U.S. download-to-own (DTO) online store to provide major motion picture titles from Lionsgate, Paramount Pictures, Sony Pictures Home Entertainment and Warner Bros. Digital Distribution in the high-quality secure DivX format. With this new service available at www.FilmFresh.com, full-length Hollywood movies can be conveniently downloaded and played on the millions of DivX devices that have shipped into the market, including DVD players, digital TVs, gaming consoles, Blu-ray disc players, and portable DVD players. Consumers have the freedom to transfer their DivX movies via DVDs, USB drives, SD memory cards, and portable hard drives, or streamed over a home network for playback on other registered DivX Certified devices they own–all on supported products from top consumer electronics brands such as LG, Philips and Toshiba.

Film Fresh is an online film destination offering a one-stop shop for movie lovers of all types and ages. In addition to Film Fresh’s large catalog of Hollywood movies and films from around the world available on DVD and via download, the site offers daily commentary on new films, and extensive opportunities for audiences to communicate using the latest social networking applications.

Titles available for download at Film Fresh will include the latest weekly Hollywood releases. The catalog of Film Fresh Hollywood titles in the DivX format is expected to grow quickly as new releases from all four studios become available for digital distribution.

“Film Fresh is now a one-stop shop for film enthusiasts of all kinds, and we are quite excited about our expansion into premium Hollywood content,” said Rick Bolton, founder and Chief Executive Officer of Film Fresh. “Our partnership with DivX goes back to the founding of Film Fresh. We have always believed that DivX offers the best download choice for consumers, since it gives people the freedom to own and watch films on a wide variety of electronic devices from many different manufacturers. It’s a good fit with Film Fresh’s central mission–expanding the audience for film. Download-to-own is going to play a critical role in the future of film distribution, and Film Fresh will provide the films people want to see, in whatever form they want to see them.”

“Through our agreements with Film Fresh and the studios, we are able to bring Hollywood movies in the high-quality DivX format to U.S. consumers for the first time,” said Kevin Hell, Chief Executive Officer of DivX, Inc. “This brings the DivX vision to reality by giving consumers the freedom to download high-quality DivX videos and enjoy them on any DivX Certified device from top manufacturers. With millions of DivX devices shipped, including DVD players, Blu-ray players, mobile phones, digital televisions, and gaming consoles DivX presents a powerful consumer-focused open solution that is ubiquitous and already in many homes.”

“Our customers have long enjoyed playing back DivX video on a variety of LG devices from DVD players to Blu-ray devices to high definition TVs,” said Tim Alessi, Director of New Product Development at LG Electronics USA, Inc. “Now with Hollywood movies available from Film Fresh in the DivX format, our U.S. consumers will be able to immerse themselves in the high-quality movie experience that DivX and our state-of-the-art products provide as they watch their favorite film classics and new releases from major studios.”

“Philips has a long history of bringing the best in cinema quality picture and sound directly into consumers’ homes, which is why we are excited to be able to take that one step further with the offering of Hollywood movies in the DivX format from Film Fresh,” said Todd Richardson, senior vice president of sales and marketing for P&F, the exclusive manufacturer and distributor for Philips televisions and home theater in the U.S. “Now our customers will be able to take their viewing experience on Philips-branded TVs, Blu-ray and DVD players to the next level with easy to download premium content in the DivX format.”

“High-quality DivX video playback is a key feature in many Toshiba products, including DVD players and digital TVs, not to mention our newest portable DVD player,” said Jodi Sally, Vice President of Marketing for Toshiba’s Digital A/V Group. “We’re thrilled that our U.S. customers will be able to download Hollywood movies in the DivX format for playback on our products in the comfort of their homes and even on the go.”

Products that bear the DivX Certified logo have undergone a rigorous testing program to ensure a high-quality DivX media experience, including reliable video creation and playback, interoperability with other DivX Certified devices and the visual quality users expect from DivX.

About Film Fresh
Film Fresh is the site for film lovers, offering a rich catalog of Hollywood, foreign, and indie films that represent the best in movie making from around the world. At www.FilmFresh.com, viewers can read about and discover new films and exchange ideas, as well as purchase films for download. It has offered both DVDs and DivX film downloads since its inception, featuring independent and international titles from Koch Lorber, E1 Entertainment, Wolfe Releasing and other arthouse content providers. The company, headquartered in Los Angeles, CA, was founded in 2005 by former digital executive Rick Bolton. The firm’s management team also includes Mike Arrieta, former Executive Vice President, Digital Distribution and Mobile Entertainment at Sony Pictures, who recently joined Film Fresh as a Partner.

About DivX
DivX, Inc. is a digital media company that enables consumers to enjoy a high-quality video experience across any kind of device. DivX creates, distributes and licenses digital video technologies that span the “three screens” comprising today’s consumer media environment–the PC, the television and mobile devices. Over 200 million DivX devices have shipped into the market from leading consumer electronics manufacturers. DivX also offers content providers and publishers a complete solution for the distribution of secure, high-quality digital video content. Driven by a globally recognized brand and a passionate community of hundreds of millions of consumers, DivX is simplifying the video experience to enable the digital home.