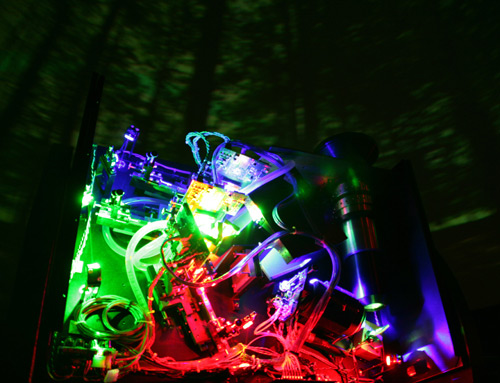 Evans & Sutherland Computer Corporation (E&S) announced today it will demonstrate its revolutionary new laser projection system at the InfoComm09 tradeshow, booth 2372, June 17-19 in Orlando, Florida. This newest E&S Laser Projector (the ESLP™ 8K) is the world’s highest resolution production video projector, and will offer research labs, control rooms, creative studios and indoor venues worldwide a window into worlds both real and imaginary, with fidelity that exceeds the limits of the human eye.

Laser projectors with NanoPixel™ technology are already in use in a growing number of planetarium theaters around the world, as part of the successful E&S Digistar™ Laser fulldome planetarium system. With the ESLP 8K, available in the second half of 2009, E&S is delivering this technology to the general projection marketplace with newly available flat-screen and panoramic-screen form factors. The new projector is also capable of displaying 3D in the highest resolution from any single projector: 4K x 4K.

NanoPixel Technology Generates Superior Picture Quality
The ESLP 8K laser projector system displays content the equivalent to sixteen times HD 1080p resolution, or the difference between 2 million pixels and 32 million. It is powered by a set of revolutionary laser light sources which offer multiple benefits, including low cost of operation. The hue of the lasers does not degrade or shift over time. Furthermore, the lasers yield a much wider useable color spectrum (200% of NTSC/HDTV) than is available in conventional LCoS, DLP, LCD, or other lamp-illuminated projectors.

E&S’ unique NanoPixel silicon imaging chip is at the core of this high-resolution machine. Its 8,192 microscopic moving ribbons provide an image free of artifacts, with no visible gaps between pixels and absolutely zero persistence (smearing) in moving images. The control of these ribbons is fine enough to yield a 36-bit/pixel (12-bit/color) useable precision in intensity.

Environmentally Sensitive
Despite its capability, the ESLP 8K comes with a surprisingly small environmental footprint. Its unique solid state laser light sources require only modest, quiet cooling and allow the projector to be powered from an ordinary wall outlet, thereby using significantly less power than other lower resolution 2K and 4K projectors. Furthermore, the laser light sources do not require periodic replacement (and disposal) as is the case with conventional lamp-driven projectors.

ESLP 8K Available for Traditional and Custom Applications
The ESLP 8K projector is targeted for commercial use in control rooms, visualization centers, education, simulation, editing, design studios, and other demanding applications all over the world. E&S will also continue to draw on its extensive research and development capabilities to meet the needs of its customers for customized and unique applications for the new ESLP 8K projector.

Evans & Sutherland, a company that has been setting the standard in advanced computer graphics for the past four decades, is poised to continue the trend at this year’s InfoComm09. The E&S Advanced Displays exhibit will be located at booth number 2372 in Hall C on the main show floor, and will showcase the ESLP 8K. The laser projector will be featured at the booth with a flat-screen forward projection display showing both 3D video at 4K and ultra-high resolution video at 8K, where InfoComm attendees will be able to experience the technology first-hand.

For a private press tour at InfoComm or a press kit with photography, contact Susan van Barneveld at tel. 714-891-3660.

About Evans & Sutherland
For over 40 years, Evans & Sutherland has been at the forefront of developing computer graphics and digital display technology, and applications that benefit from it. Since the 1980’s the company has applied its technology to offer the latest in high quality digital projection systems for digital planetariums and digital cinemas worldwide. E&S now produces professional hardware and software to create highly realistic visual images for digital theater and other applications throughout the world. In addition, Spitz, the leader in display dome manufacturing and a wholly owned subsidiary of E&S, designs domed theater and astronomical systems used in academics and entertainment. Evans & Sutherland is headquartered in Salt Lake City, UT and they also have offices in Chadds Ford, Pennsylvania, and Beijing, China.