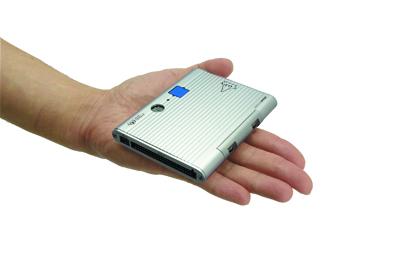 The Disk Jockey has been called “a dream come true for any PC hobbyist or technician” — Computer Power User, Oct. 04 and has been deemed “a worthy addition to the IT professional’s toolbox” — Macworld, December 04. The product also recently won the Editor’s Choice award from MacAddict magazine (April 05) where it was called “geekily cool and useful.”

“Honey, we’ve shrunk the Disk Jockey!” exclaimed Tony Overbay, CEO of Diskology, Inc. “The Disk Jockey has already been well received from our users and in the press, but we decided to make it even better. It will literally fit in your shirt pocket, and we even made concessions for the number of pens and pocket protectors our typical customer wears.”

The Disk Jockey is a Swiss Army Knife of a product. The Disk Jockey can be used on either a Microsoft Windows or Apple Macintosh computer or as a stand-alone device. The Disk Jockey mounts IDE hard drives via USB 2.0 or Firewire (IEEE 1394) as well as mirrors, spans, copies, compares, tests and erases hard disk drives using either a 1-pass or 3-pass erase per National Security Administration (NSA) guidelines. Testimonials on how the Disk Jockey is being used by IT and MIS departments, as well as a variety of other computer professionals, hobbyists and forensic experts can be found on Diskology’s website.