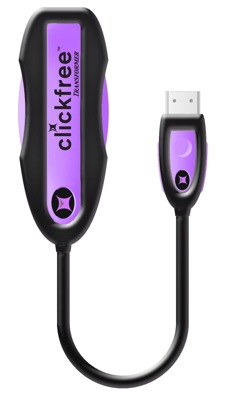 Storage Appliance Corp. — the company whose portable backup systems made the otherwise laborious task of backing up computer data manually a thing of the past — today announced another breakthrough with the launch of its Clickfree Transformer Cable. The new Transformer USB cable instantly turns any competitor’s external hard drive into a Clickfree automatic backup device, completely eliminating the hassle and confusion of installing and configuring backup software. Like all Clickfree products, there is no software to install or configure, it is truly automatic – right out of the box.

“The Clickfree name has become synonymous with effort-free computer backup. Regardless of what the competition claims, our new Clickfree Transformer Cable is the only way to make a regular external hard drive easy to use, requiring no software or configuration, and immediately backing up everything that matters from your computer’s hard drive,” says Storage Appliance Corp. CEO, Bryan McLeod. “The Transformer Cable works with any manufacturer’s USB external hard drive to deliver automatic, no-click backing up. Finally, you can stop avoiding backup because it was too much trouble!”

The Transformer USB cable is so easy to use. Simply plug it in to your computer, then connect the other manufacturer’s hard drive and it instantly becomes a totally automatic Clickfree backup drive that searches, organizes and backs up all of your PC data and digital files. There are no instructions to read, no software to install and configure, no copying and pasting files, it’s really that easy.

Creative Strategies president and principal analyst Tim Bajarin adds, “Backing up personal content is becoming more important as people turn their photos, movies and other content into digital formats. The Clickfree Transformer Cable now makes it very simple to take any hard drive and turn it into a highly personal back up device.”

Clickfree’s entire lineup of products, from the Transformer Cable to Clickfree portable backup drives and DVDs, are designed for the 85 to 95 percent of computer users who, research shows, fail to regularly backup content on their PCs because they do not have the time, desire or skill to install, set up and use confusing or complex software and hardware products.

The Cable Backup has a retail price of $59.99 and is available now by ordering directly from the Storage Appliance Corporation’s website (www.clickfree.com) and other retailers.

Clickfree products can also be found at leading outlets such as Best Buy, FRYS, OfficeMax, and Walgreens, in addition to Amazon.com, Costco.com, Newegg.com, and Walmart.com, with additional major retailers coming soon.