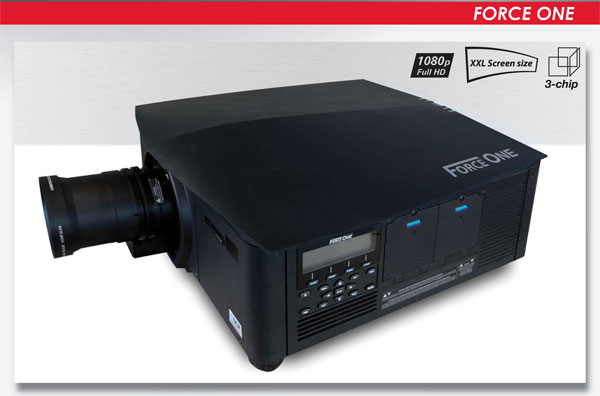 Cineversum has announced an exciting addition to their roster of High Definition digital video projectors. The FORCE ONE is a state-of-the-art multi-use full-HD 1080P digital projector with a 16:9 native aspect ratio, and designed to be used with screens up to 49 feet wide. It features three 0.95″ DLP 1920×1080 panels, a 10,000:1 contrast ratio and up to 6,000 ANSI lumen brightness. Retail price of the FORCE ONE (without lens) in the U.S. and Canada is US $95,000, and availability will be limited a few select dealers in the U.S., Canada, and the Caribbean.

Contrast Ratio, Brightness and Screen Size
Jean-Claude Younes, CEO of Cineversum, was asked to explain the comparison between this new elite projector and the recently introduced BlackWing Three mk2010 HD projector, “I’ve been asked how can a FORCE ONE with a 10,000:1 contrast ratio be superior to a BlackWing Three with a 50,000:1 ratio. The full on/off contrast measurement method favors small projectors which have a naturally low darkness, improving the full “off” measurement by a fair amount. Obviously, a BlackWing, also due to the LCoS technology excels in this domain. The FORCE ONE beats its natural competitors because its native contrast ratio 2500:1 (already superior to most, if not all competitors), is enhanced by an ultra-high performance dynamic iris, bringing, at an impressive 6000 ANSI lumens, the contrast up to 10,000:1. That is the first time that a 49 foot screen can be displayed with a 5-digit full on/off contrast ratio. 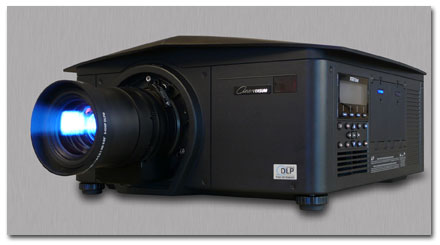 “A FORCE ONE is more perfectly paired to a super-large screen than a BlackWing because of its ANSI contrast. This measurement is done with a checkerboard patterned test image (in our case, a 16-point check) where the luminosity values are measured simultaneously. This is a more realistic measure of system capability, but includes the potential of including the effects of the room into the measurement, if the test is not performed in a room that is close to ideal. Literally, the width of the screen and the ambient brightness of the room will be taken into account. The bottom of the ANSI contrast range is 1:1, which means that you cannot distinguish a dark pixel from white ones within a single picture. The top of the range is ideally infinite:1 which means that whatever your screen size, you will be able to obtain a neat separation between your darkest pixels and whitest pixels. Concretely, the ANSI contrast for a projector will define its capability to keep the distinction between every pixel displayed on the screen.

John Caldwell, sales director for StJohn Group, stated, “This is truly a projector for the elite home cinema enthusiast. The FORCE ONE has the same style and high design as the acclaimed BlackWing projector series and comes in a futuristic deep metallic-black ABS plastic chassis designed in Paris, France. They will appreciate the projector’s True Cinema Black™ and a real white unlike anything ever seen before in home cinema, plus its quiet operation.

About Cineversum
Cineversum initially was conceived as the dedicated consumer brand for famed Belgian video manufacturer Barco. In September 2004, Technic Electronic Conseil (T.E.C.) took over worldwide distribution of Barco’s home theater business, including the Cineversum name. T.E.C. is based in the Montmartre district of Paris, France.

Led by French industry pioneer Jean-Claude Younes, T.E.C. has successfully developed the Cineversum Home Cinema Concept. In close cooperation with partners such as Barco, Cineversum has steadily built a range of cutting-edge video products for the professional home theater market and are distributing them worldwide through a network of specialist distributors.

The BlackWing line, dedicated to the professional A/V installer, was awarded the prestigious Product of the Year 2008 award by Electronic House magazine.