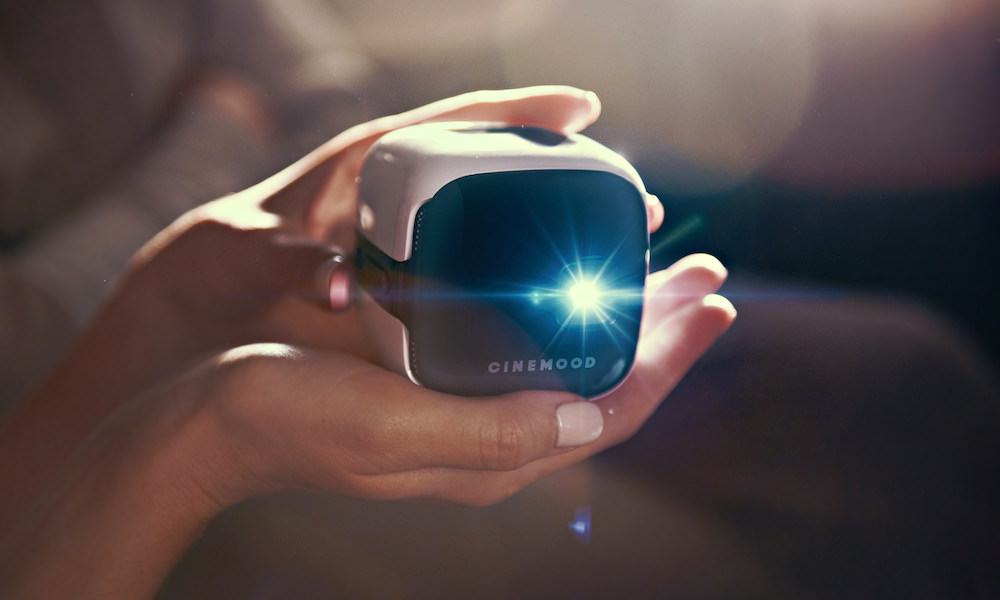 Voice Activated Mini Projector for Kids Could Stream Without Wi-Fi

CINEMOOD announced plans to create a wireless portable projector prototype called CINEMOOD LTE, as well as its localized version called CINEMOOD WHITE for the US market. Each cube shaped mini DLP projector is designed for kids and can project content onto any surface. The company claims viewing its projector is a better alternative for kids over watching tablets, because reflected light from CINEMOOD does not contain blue spectre that is believed to disrupt childrens’ bio rhythms.

CINEMOOD LTE provides an “Attractive Learning” experience via an interactive voice interface and AR for kids, and extends beyond Wi-Fi with an offline mode or by connecting to a high-speed network provider. The new CINEMOOD LTE extends the portable cinema projector’s possibilities to be used while preserving the uniqueness of the product’s previous version and, in particular, its award-winning design.

In one click, kids and adults can dive into the magical atmosphere created by the portable cinema projector. CINEMOOD LTE will be 5 times brighter than the original version with a 20% wider picture, which provides an immersive cinematic experience at any time of the day, in any place. Thanks to LTE, there is the opportunity to stay connected and stream online content all over the country. Interactive features such as cognitive games, voice control, and 360 AR content provide a brand new “Attractive Learning” experience for both kids and families. CINEMOOD LTE comes with preloaded, licensed content and an internal memory of 32GB for personal files, making this the best portable cinema projector on the market.

CINEMOOD WHITE is packed with 67 Disney original stories and cartoons, as well as over 120 hours of preloaded, popular animations, cartoons, filmstrips, audio books, and lullabies. In addition to the preloaded content, there are several online services inside, including Netflix, YouTube, YouTube Kids, and online cinema ivi.

“We entered the market in a fundamentally new category of content distribution devices, not as a hardware upgrade for a typical pocket projector, but instead to establish the concept of a portable movie theater. This developed into CINEMOOD, which gives users access to fun, educational content, the streaming services of our partners, and a huge library of new movies and TV series. We expect significant a growth in users with the new version of the product. This is the evolution of our product vision featuring significant expansion of usage scenarios and functionality,” says CINEMOOD product director Dmitriy Matrosov. “We are looking forward for the new business opportunities with telecom and content providers around the globe.”

Availability
The company will announce the start of official sales of CINEMOOD WHITE on January 9 at CES 2018. In addition, CINEMOOD will launch a crowdfunding campaign to raise funds for CINEMOOD LTE production.

About CINEMOOD
In 2017, CINEMOOD began sales of the previous version of the CINEMOOD Storyteller 2.0, which was widely distributed across the United States and Europe. Company progress has been historic through the year, with not only tens of thousands of units of the CINEMOOD Storyteller being already sold but also the company managing to land licenses for Disney content, beginning to cooperation with Netflix, participating in the HAX Accelerator program, and also winning the 2017 Red Dot Award—a product design competition.