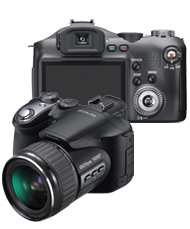 Casio America, Inc. and its parent company, Casio Computer Co., Ltd., announced a firmware update for the EXILIM Pro EX-F1 digital camera today. The update will add Casio’s unique “Prerecord movie” function to the camera, helping to ensure that users will never miss another once-in-a-lifetime scene when shooting movies. Firmware Ver. 1.10 for the EX-F1 will be available on Casio’s English website starting July 8, and thereafter on websites in other languages.

Released in March this year, the EXILIM Pro EX-F1 features ultra-high speed burst shooting, enabling users to capture every instant of each priceless memory at 60 still images per second in high resolution, 6.0-megapixel quality. It also comes with a High Speed movie mode that records up to 1,200 frames per second, permitting ultra-slow motion playback of movement that is too fast for the human eye to perceive. The EX-F1 has won great acclaim and popularity as the first of an entirely new genre of digital cameras that is totally changing the nature of photography.

Casio introduced Firmware Ver. 1.02 in April 2008 to improve the camera’s ease of use. That release offered a greatly reduced start-up time and enabled high speed zooming when recording Full High-Definition movies. The new Firmware Ver. 1.10 adds the Prerecord Movie function, which, when turned on, permits movie capture to commence 5 seconds before the user actually presses the Movie Button. Prerecord Movie works with all movie modes, including 30 fps Standard movie mode, the 300 fps, 600 fps and 1200 fps High Speed movie modes, and the Full High-Definition movie mode. This firmware update will help users get the most out of their EXILIM Pro EX-F1 digital cameras. The days of shooting movies but missing the best part of the moment are gone.

Firmware Ver. 1.10 for the EXILIM Pro EX-F1 will be available for download free of charge from Casio’s website.