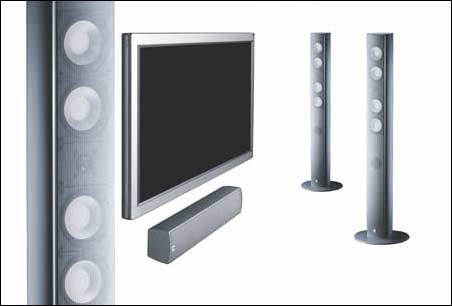 The current line consists of the CD 300 floor-standing tower speaker and the CD 360F, which includes the same driver configuration adapted for vertical or horizontal wall mounting. With their slender brushed-aluminum enclosures and silvery grills, these speakers create a very dramatic presence in a room, while delivering sound quality that will please the most demanding audiophiles.

Both speakers are sophisticated two-and-a-half way systems with four 4-inch aluminum cone drivers and an advanced version of the Canton’s lauded ADT-25 one-inch aluminum-manganese tweeter. Two of the 4-inch drivers reproduce low-frequency bass signals exclusively, while the other two reproduce both bass and midrange sounds. For bass reproduction, this arrangement provides the equivalent surface area of an 8-inch woofer in a much narrower cabinet.

The remarkable Canton ADT-25 tweeter uses a one-piece aluminum-manganese dome and voice coil former that is vastly superior to more conventional designs where a separate dome and former are glued together. Not only is this entire structure much lighter and stiffer than two-part designs, but the dome provides a large surface area to radiate heat away from the voice coil. One of the key design elements of this tweeter is the use of a very narrow voice coil gap to increase the intensity of the magnetic field. Most other tweeters have relatively wide gaps to allow a margin of error for centering the coil in the gap, but even then a small displacement can harm the performance of the tweeter. Canton has overcome this by making it possible for quality control technicians to adjust the centering of the coils using test signals and to lock them in place only when the test is perfect. Additionally, the cross-section of the coil and former is much thinner than conventional designs. These factors provide for much higher output levels, high linearity, and excellent efficiency.

The four identical 4-inch bass/midrange drivers have aluminum cones with concave dust caps, and powerful motor systems. The drivers are derivatives of the same top-quality midrange drivers used in Canton’s high-end Karat and Ergo speaker lines, and the wave system (cone, dust cap, and surround) is modeled on that used in the Karat Reference line. The motor structure has been subtly redesigned to accommodate the wider frequency demands of the bass/midrange application in the CD 300 and 360F.

Upon encountering the Canton CD 300 tower speaker, the first thing that is apparent is the speaker’s unusual appearance. The 48-inch tall enclosure is less than 5 inches wide, has a depth of just over 6-inches, and is constructed of extruded aluminum with rugged pressure-cast aluminum end-caps and circular base. Bass performance is further enhanced by the use of bass-reflex topology with a single front-panel port. The careful and precise modeling of the flare on this port alone yielded a 6-dB improvement in system headroom.

The Canton CD 360F features the same basic design considerations and driver complement as the CD 300, but in a sealed cabinet that is just 23-1/2-inches long and a mere 4-inches deep. This makes it ideal for wall mounting and equally effective as a vertical speaker beside a wall-mounted video screen, or in a horizontal configuration for use as a center channel speaker. The speaker employs a sealed cabinet design to avoid having the port vent directly into the wall face. The CD 300 and CD 360F are a perfect tonal match for each other, so they can be mixed and matched within a system.