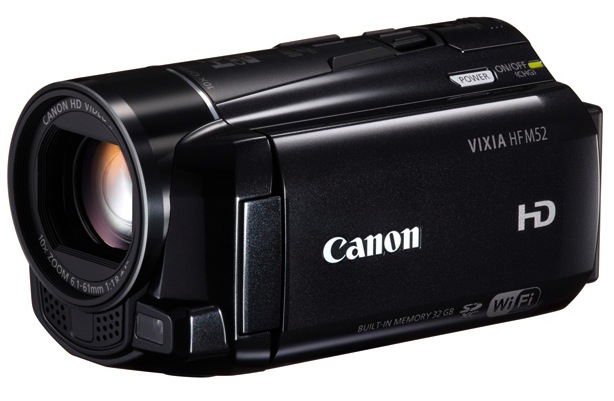 Canon has improved low-light image capture, a new Intelligent Image Stabilization (IS) system and the ability to capture MP4 video recordings. Canon has included dual codec recording, giving users the option to record in AVCHD, for the highest quality viewing on an HDTV, or in MP4 format, for easy sharing with mobile devices or social networks. The new 2012 VIXIA models feature a 20 percent improvement in low-light performance compared to previous models as a result of enhancements made to Canon’s HD CMOS Pro Image Sensor. The sensor boasts a minimum illumination rating of 1.2 lux, Canon’s lowest lux rating to date in a consumer HD camcorder. Another enhancement to select models in Canon’s 2012 VIXIA lineup is the ability to export content directly to an external hard-disc drive through an optional USB adapter for simple file sharing and archiving without the need of a computer.

All three models include Canon’s newly designed Flat Touch Panel 3.0-inch LCD screen for a large display and an improved menu system and button layout, and now also record in MP4 file format to make content easier to share across mobile devices and online social networks. The VIXIA HF M52 and VIXIA HF M50 incorporate 32GB and 8GB of internal flash memory, respectively, and feature HD-to-SD Downconversion. They also include Wi-Fi connectivity, which enables the ability to upload videos wirelessly to YouTube and Facebook through use of an iPad or iPhone app. The models also include DLNA connectivity which enables wireless access to a DLNA-compatible device. The VIXIA HF M500 records directly to a SDXC-compatible card slot. The new VIXIA HF M-series is also compatible with the new Canon WP-V4 Waterproof Case, great for vacations, underwater videography, or any wet conditions.

Each new camcorder will be available March 2012: 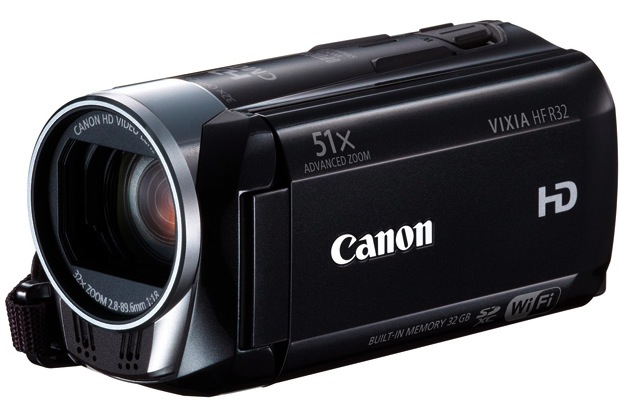 Each new camcorder will be available March 2012: 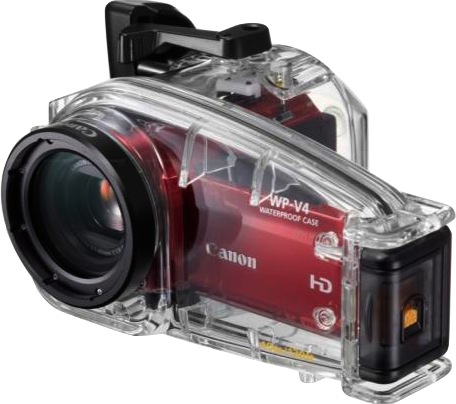 The new Canon WP-V4 Waterproof Case helps protect any of the 2012 VIXIA HF M-series camcorders in depths of water up to 130 feet, allowing users to capture exciting HD footage even underwater. This compact and lightweight housing seals the camcorder, allowing easy on-camera operation and control for all water sports activities such as scuba diving and whitewater rafting. The Canon WP-V4 Waterproof Case is expected to be available in March 2012 for $599.

Popular VIXIA Features:
The 2012 VIXIA lineup retains many popular features that make it easy to record outstanding HD video, such as Canon’s Smart AUTO mode that intelligently detects and analyzes brightness, color, distance and movement to automatically select the best of 38 available pre-set setting selections for the scene being recorded. Canon’s Touch & Track feature allows users to select any subject on the Touch Panel LCD screen with their finger, which the camcorder will then track to ensure sharp focus and proper exposure. The camcorders also include built-in Cinema-Look Filters that give the look of a variety of cinematic styles by compensating for the color, gamma and other aspects of the image’s quality. Select 2012 VIXIA models have Relay Recording for seamless uninterrupted video recording from one memory source to the next. When the primary recording media is full, the camcorder continues to record the scene by switching to the next memory source, so that users won’t miss a moment of action.

As an integrated part of Canon’s Intelligent IS, the Powered IS feature provides a higher level of compensation for subtle hand movement at the telephoto end of the zoom range. In addition, all VIXIA camcorders with built-in memory feature HD-to-SD Downconversion, which enables users to convert recorded high-definition video to standard-definition files while preserving the original HD footage. These down-converted files make it even more convenient to share video online or create a DVD. Each new model is also compatible with Eye-Fi SD Memory Cards, allowing for wireless uploading of video content to a computer, social networking site or video sharing website.