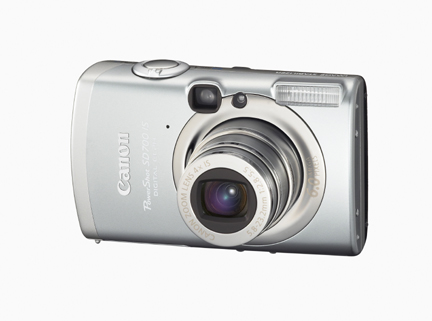 With these new Digital ELPH cameras, we once again confirm the adage that great things come in small packages, and from these great things come great pictures. It is truly a gift that keeps on giving,” stated Yukiaki Hashimoto, senior vice president and general manager of the Consumer Imaging Group at Canon U.S.A., Inc. “We recognize that if we continue to make digital cameras easy to use, easy to take along, and attractive enough to fit in wherever one goes, people will carry them as a matter of course and chronicle their daily lives for fun, whim, and whimsy and not simply for the momentous occasions that occur.”

Featured enhancements on all three of these new Digital ELPH cameras include Canon’s newly designed six-megapixel image sensor that together with Canon’s proprietary DIGIC II image processor helps to dramatically reduce “noise” for better image quality and achieves ISO equivalent speed ratings ranging from 80 to 800. This increased sensitivity allows the use of faster shutter speeds, thereby reducing the effects of camera shake and subject blur during hand-held photography in low light.

Light weight and feature packed, these three fashionable Digital ELPH models are easily slipped into a pocket or nestled in a purse making them the quintessential go-anywhere cameras. Despite their diminutive dimensions1, these new Digital ELPH models all feature large, easy-to-read 173,000-pixel LCD screens ranging in size from 2.5 inches to three inches.

Adding to the unshakeable quality that is the benchmark of Canon cameras is the PowerShot SD700 IS Digital ELPH camera’s new Optical Image Stabilization. Unlike electronic image stabilizer systems that typically cause degradation of image quality, Canon’s Lens Shift Optical IS system is based on the advancements made in the development and refinement of Canon’s EF and video lenses. Reduced in size to fit ELPH scale, this Image Stabilizer provides up to three stops of camera shake correction in shutter speed equivalent. What’s more, when combined with these ELPH models’ top ISO rating equivalent of 800, its new six-megapixel image sensor that further reduces image noise and the model’s fast f/2.8-5.5 4X optical zoom lens (35-140mm equivalent), the odds of taking a shaken or blurred image are dramatically reduced. Both the Image Stabilizer and the 4X optical zoom are firsts for the Digital ELPH series.

The SD700 IS Digital ELPH camera sustains and surpasses the elegant lines and “perpetual curve design” first introduced on the PowerShot SD500 Digital ELPH model. The body shaping method reduces unevenness and fits the hand more comfortably. Like its predecessor, Canon sculpted the PowerShot SD700 IS Digital ELPH camera with a gradual bulge from the grip side of the camera towards the flash side, achieving a visually slim appearance from the front, while the still trim side panels add to the camera’s ultra-thin appearance. Indeed the dimensions of this Digital ELPH camera make the large and vibrant 2.5-inch LCD screen seem larger still. The camera’s tricolor finish–ice metal silver, moonlight silver, and ebony black–add designer elegance to what is already an impressive photo experience.

The PowerShot SD700 IS Digital ELPH camera will be available in April for an estimated selling price of $499.992. 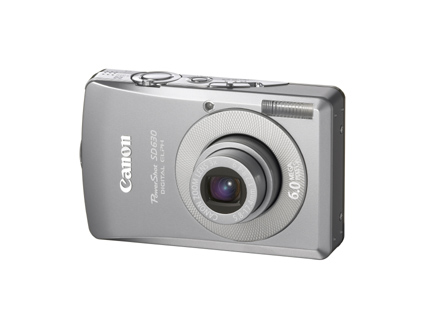 The PowerShot SD630 Digital ELPH camera features an ultra large 3.0-inch wide viewing angle type
173,000-pixel LCD screen with adjustments for 15 levels of brightness. What’s more, the camera also features an innovative new touch control dial–similar to those found on many popular MP3 players–that allows users to easily scroll through captured images or change the camera’s menu settings. In order to accommodate the larger LCD screen, the PowerShot SD630 Digital ELPH camera does not include a real-image optical viewfinder, which Canon offers on most other Digital ELPH models.

The PowerShot SD630 Digital ELPH camera will be available in April for an estimated selling price of $399.99. 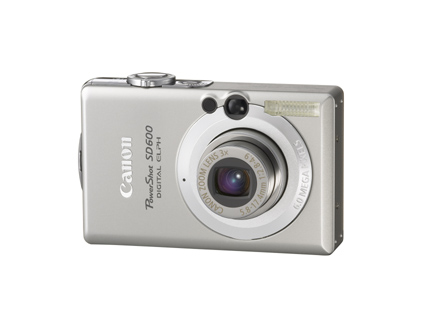 The PowerShot SD600 Digital ELPH will be available in March for an estimated selling price of $349.99.

DIGIC II Image Processing Technology–Hi-Speed USB 2.0
True to the PowerShot tradition, the new Digital ELPH cameras have many of the latest advances in Canon technology including the proprietary DIGIC II imaging processor. The processor enhances picture definition, vibrancy, and quality, while helping increase the speed of the cameras’ startup, autofocus, shutter response, playback, and image processing speed while reducing power consumption by 35 percent compared to the original DIGIC chip. Consumers benefit from accelerated image transfer speed (when used with a USB 2.0 compatible computer, printer, or other peripheral), thanks to the inclusion of a Hi-Speed USB 2.0 port. The USB 2.0 port is backwards compatible (at no increased speed) with computers featuring standard USB 1.1 connections.

Direct Print
Like all PowerShot digital cameras, these new Digital ELPHs work seamlessly with Canon’s petite SELPHY Compact Photo Printers–an essential PowerShot accessory. Consumers simply connect their PowerShot digital camera to a SELPHY printer–such as the SELPHY CP510 and CP710 models. Press the lighted Print/Share button, and within seconds3, images emerge. Presto! It is that simple. Canon’s SELPHY Compact Photo Printers are PictBridge compatible. They work with PictBridge enabled digital cameras and offer excellent image quality and ease-of-use, especially when paired with a Canon digital camera. At 28 cents per print4, printing photos directly from a digital camera is both easy and affordable.

Canon will debut the new line up of PowerShot Digital ELPH cameras in its booth (#3509) during the Photo Marketers Association (PMA) exhibit in Orlando, Fla., from February 26-March 1, 2006.

All referenced product names, and other marks, are trademarks of their respective owners. Specifications are subject to change without notice.
1PowerShot SD600 Digital ELPH: 3.4 x 2.1 x 0.8 in.; PowerShot SD630 Digital ELPH: 3.6 x 2.2 x 0.8 in., PowerShot SD700 IS Digital ELPH: 3.6 x 2.2 x 1.0 in.
2All prices referenced are estimated selling prices only. Actual prices set by dealer and may vary.
3Print speed of up to 58 seconds is based on average output speed achieved during product testing with DIGIC II processor embedded Canon PowerShot digital cameras. Other products’ print speed may vary. Printer functions are sensitive to temperature and humidity.
4Information is based on Canon KP-108IP paper and ink pack, manufacturer’s suggested retail price as of 6/15/05, and as compared to competitors’ similar products.