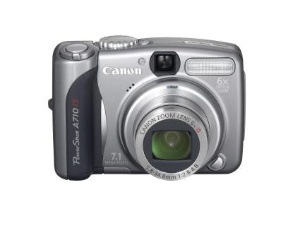 Canon’s new PowerShot A710 IS, A640 and A630 compact digital cameras combine functionality with photographic simplicity, all in a compact form factor that fits snugly in the hand. These 7.1, 10.0 and 8.0 megapixel cameras pack a high resolution punch to ensure that consumers’ most cherished memories are clear and crisp today and for years to come. The cameras will be in stores this October for estimated selling prices of $399.99*, $399.99* and $299.99*, respectively.

Named for their use of AA batteries, Canon’s A-series digital cameras offer comfortably placed controls and feature high image quality in order for consumers to capture, save and share images of meaningful memories, personal milestones and family functions.

PowerShot A-Series – They All Pack A Punch

PowerShot A-Series – They Have More Scenes Then Ever Before

The new A-Series digital cameras are also capable of recording VGA movies with sound at 30 frames per second for up to 36 minutes per clip with optional high-capacity 4GB SDHC memory cards, making them perfect for capturing memories in motion.

PowerShot A-Series – It Is All In the Design

The new cameras’ grips are ergonomically improved, and the control layout is even easier to use then before. The large and bright 2.5-inch LCD screens feature TFT design for a wide viewing angle, and the size of the screens makes it easier for users to read menu settings and preview or review their photos.

Canon’s enhanced (from previous models) ‘My Colors’ mode provides PowerShot users with an incredible range of creative photo effects, which can be accessed directly from the camera with no need for post-processing in a computer. Consumers can adjust a specific color within an image to modify the look and feel of their picture. Available My Color playback modes include Vivid Blue, Vivid Green, and Vivid Red; lighter and darker skin tones, as well as options for creating black & white, sepia, neutral and positive film effects. Where previously, users could only enable ‘My Colors’ while shooting, the updated My Colors mode lets users retouch captured images as well, without the need for special software applications or tools.

With Canon’s cameras and photo printers, consumer can enjoy a complete digital imaging solution from nearly anywhere. Located on the backside of the new PowerShot A-Series digital cameras is the Print/Share button. This button simplifies and accelerates direct printing to compatible Canon and PictBridge enabled printers and one-touch image transfer to computers*** for use with image processing programs, uploading to the Internet, or as email attachments. When consumers connect their camera to a compatible printer or computer via the supplied USB cable, the Print/Share button illuminates to let the user know to press the Print/Share button to begin the printing or downloading process.

PowerShot A-Series – What’s in the Box

PowerShot A710 IS digital camera

PowerShot A640 and A630 digital cameras