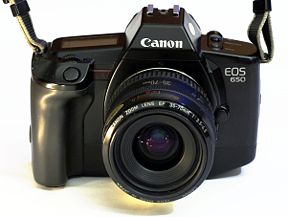 In March of 1987, Canon’s 50th anniversary, the company introduced the EOS 650 AF SLR camera, the first model of the EOS series. The EOS 650 incorporated the world’s first fully electronic mount system, achieving complete electronic control not only between the lens and body but throughout the entire camera system, representing a new generation of AF SLR cameras. Standing for “Electro Optical System” while also carrying the name of the Greek goddess of the dawn, the EOS series marked the dawn of an impressive range of innovative technologies and new heights of technological development.

Designed to realize Canon’s key concepts of high speed and ease-of-use, EOS cameras garnered high acclaim from a wide range of users. In 1989 the company introduced the top-of-the-line EOS-1 professional model, and in 1992 the EOS 5 QD (EOS A2/EOS A2E or EOS 5 in regions outside Japan), equipped with Eye-Controlled Focus, a groundbreaking AF function that allowed users to select a desired focusing point just by looking at it. The following year, in 1993, Canon succeeded in expanding the company’s user base with the compact, lightweight EOS Kiss (EOS Rebel XS or EOS 500). In 2000, Canon formally ushered in the age of the digital SLR camera with the introduction of the EOS D30, equipped with the company’s proprietary CMOS sensor. In addition to developing in-house such key components as CMOS sensors and the high-performance DIGIC digital image processor, Canon offers an extensive lineup of EF lenses and has launched cameras aiming to fulfill the company’s new key concepts of high speed, ease-of-use, and high image quality. This year, commemorating the 20th year of the EOS series, Canon has further bolstered its digital SLR camera lineup with the launch of the top-of-the-line EOS-1D Mark III and EOS-1Ds Mark III, featuring a fully revamped camera system, as well as the EOS 40D, which has won praise from a wide range of users, from first-time SLR camera owners to advanced amateurs.

Canon, through continued technological innovation with the EOS series, and by strengthening its marketing activities to deliver enhanced product quality and services, will continue its efforts to deliver all-around user satisfaction with an even more attractive lineup of products, contributing to new directions in the future of photographic expression.

This is a copy of a release issued in Japanese by Canon Inc. in Tokyo on December 20, 2007.

About Canon U.S.A., Inc.
Canon U.S.A., Inc. delivers consumer, business-to-business, and industrial imaging solutions. Its parent company, Canon Inc. (NYSE:CAJ), a top patent holder of technology, ranking third overall in the U.S. in 2006+, with global revenues of $34.9 billion, is listed as one of Fortune’s Most Admired Companies in America and is on the 2007 BusinessWeek list of “Top 100 Brands.”

All referenced product names, and other marks, are trademarks or registered trademarks of their respective owners.