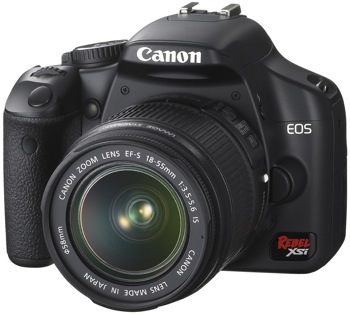 Canon U.S.A., Inc.’s EOS Rebel series of digital single lens reflex cameras – the cameras that defined and refined what it means to be an “entry level” digital SLR – have now redefined the gateway prowess and “pro-ness” of the DSLR category with the introduction of the line’s new leader, the 12.2-megapixel EOS Rebel XSi camera. Incorporating a number of high-end functions and technology found in Canon’s professional SLR models, the EOS Rebel XSi camera boasts an improved autofocus sensor, enhanced 14-bit A/D conversion, an advanced Live View function, and the proprietary DIGIC III image processor. When paired with any of the more than 60 compatible Canon EF and EF-S lenses, including optically image stabilized EF-S lenses like the EF-S18-55mm f/3.5-5.6 IS — now included in the EOS Rebel XSi kit — or the new EF-S55-250mm f/4-5.6 IS, the EOS Rebel XSi DSLR delivers images that will delight and inspire family and friends at an entry level price tag.

“This new EOS Rebel XSi camera is the answer for those who have been waiting to make the leap from digital point-and-shoot to digital SLR or from an older SLR to the latest generation of advanced technology, while still including the creative controls their old camera afforded them,” states Yuichi Ishizuka, senior vice president and general manager, Consumer Imaging Group, Canon U.S.A.

Luxury Feel and Function
At first glance, one notices the Rebel XSi’s large, 3-inch LCD monitor, enhanced from the 2.5-inch screen on the Digital Rebel XTi model. The larger 230,000 pixel screen makes it easier for users to review images and scroll through the Rebel XSi camera’s menus. The larger-sized display provides the ability to use a larger font size for menu text, making it easier than ever to read settings and options. The new screen also features a broadened color gamut, seven brightness settings for easy viewing under a variety of shooting conditions and a wide viewing perspective in all directions.

The EOS Rebel XSi camera features a substantial yet streamlined profile, with curved edges, contoured surfaces, conveniently placed controls and comfortably constructed rubber grip and thumb rest that all contribute to fatigue-reducing hand fit. The camera body is constructed of a rugged yet lightweight combination of stainless steel and polycarbonate embedded with glass fiber. The chassis exterior is enrobed in a durable ABS and Polycarbonate resin and offered in a choice of silver or black finishes. 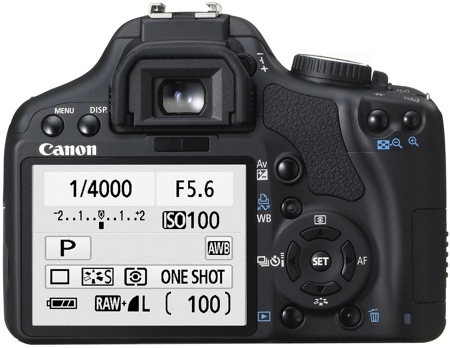 Another image quality enhancement is the upgrade of the Analog-to-Digital (A/D) conversion process to a 14-bit A/D processor. The inclusion of the 14-bit A/D process means the Rebel XSi camera records up to 16,384 colors per channel and allows the camera to produce images with finer and more accurate gradations of tones and colors. This is ideal for shooting outdoors where subtle hue changes in sky, water or foliage can really add to an image.

DIGIC III Image Processor
If the 12.2-megapixel APS-C size CMOS sensor is the heart of the camera, then Canon’s DIGIC III processor is the brain. The latest generation of Canon’s proprietary image processing engine, DIGIC III technology ensures that the fine details and natural colors of the images are optimally recorded. The DIGIC III processor also manages the camera’s efficient energy consumption and high-speed signal processing performance. The EOS Rebel XSi is the first model in the Rebel series to incorporate DIGIC III.

Enhanced Live View
Introduced in 2007 on the EOS-1D Mark III DSLR, this function makes its debut in an entry level Canon DSLR with the EOS Rebel XSi camera. Live View allows users to frame shots through the LCD screen rather than the viewfinder. Going beyond the manual focus and phase-detection AF capabilities of earlier EOS models with Live View, the EOS Rebel XSi camera adds a new “Live Mode” contrast-detection AF function that allows the camera to focus automatically during Live View without lowering the reflex mirror.

Improved Autofocus and Framing Rate
The EOS Rebel XSi Digital SLR utilizes a precise nine-point Autofocus (AF) system featuring a newly developed AF sensor that improves the camera’s subject detection capabilities compared to earlier models. The new Rebel XSi DSLR provides a cross-type AF measurement at the center that’s effective with all EF and EF-S lenses, while providing enhanced precision with lenses having maximum apertures of f/2.8 or faster. The cross-type AF measurement reads a wider variety of subject matter than conventional single-axis AF sensors and thus increases the new camera’s ability to autofocus quickly and accurately. The EOS Rebel XSi is also the fastest firing Rebel model to date, capable of continuously capturing 3.5 frames per second for bursts of up to 45 images in large/fine JPEG mode and 6 frames in RAW mode. The faster frame rates and finer focusing capabilities of the Rebel XSi together with its impressive image burst rate will help photo enthusiasts preserve family milestones or capture split second sports action at just the right moment.

EOS Integrated Cleaning System
The new Rebel XSi DSLR utilizes Canon’s EOS Integrated Cleaning system, first introduced on the EOS Rebel XTi camera. The camera’s Self-Cleaning Sensor Unit shakes dust particles off of the low-pass filter in front of the sensor. The dust is then trapped by an adhesive along the base, preventing it from causing further nuisance. Cleaning is engaged each time the camera is powered up or shut down or manually through the “clean now” function.

The second part of the cleaning system involves post processing with a compatible personal computer and the supplied Digital Photo Professional software. Here the camera maps any spots that may remain on the sensor, saving it as Dust Delete Data and subsequently subtracting dust spots from the final image during post processing. A third option includes a manual sensor cleaning function which raises the mirror and allows users to clean dust that may have stuck to the low-pass filter.

Back to the Basics
In keeping with its EOS system heritage, the new Canon EOS Rebel XSi camera is equipped with a host of useful creative controls, including shutter speeds ranging from 1/4000 sec. to 30 sec. plus Bulb, a choice of four metering patterns including 4% spot metering (another first for the Rebel series), a wide range of exposure modes from fully automatic to fully manual, depth of field preview, mirror lock and much more. The new camera is fully compatible with all Canon EF and EF-S lenses, as well as EX-series Speedlites, an optional Battery Grip, and remote control and viewfinder accessories.

In the Box
Expected to ship in April 2008 the Canon Rebel XSi camera is available in body-only configuration which includes a rechargeable battery pack and charger, USB and video cables, a neckstrap, an EOS Solutions Disk CD, and a 1-year Canon U.S.A., Inc. limited warranty. The new camera will also be available in a lens kit version which includes everything in the body-only kit plus the EF-S18-55mm f/3.5-5.6 IS zoom lens. The two versions carry estimated retail prices of $799.99 and $899.99, respectively.

EF-S 18-55mm f/3.5-5.6 Image Stabilizer Lens
First introduced in August of 2007, the Canon EF-S 18-55mm f/3.5-5.6 IS zoom lens is Canon’s answer to consumer demand for a high-quality yet affordable optically image stabilized lens and is included as the standard lens in the Rebel XSi kit configuration. The lens features the wide-angle to mid-range zoom flexibility of its non-IS predecessor with the significant advantage of Canon’s true optical, lens-shift image stabilization system that yields up to a full four stops of image-shake correction. The EF-S 18-55mm f/3.5-55.6 IS zoom lens sells separately for $199.99*, but when customers purchase the lens kit version of the Rebel XSi the difference in price is only $100* from the price of the body-only kit. Canon is offering the lens kit at this discount so that more customers can enjoy the benefit of a lens based image stabilizer system.

The higher performance provided by Canon’s lens shift IS system (compared with the in-camera body sensor shift type offered in some competitive SLRs) includes the ability to optimize the lens performance for specific shooting situations such as low light, long-zoom or movement while shooting (or virtually any combination of the three). What’s more, the photographer can see the optical image stabilization effect in the viewfinder. As the image already appears steady in the viewfinder or on the screen through the Rebel XSi Live View function, better framing and composition is possible allowing the photographer to concentrate on the best shot more comfortably.

All referenced product names, and other marks, are trademarks or registered trademarks of their respective owners.

Availability, prices, and specifications of all products are subject to change without notice. Actual prices are set by individual dealers and may vary.

* Based on estimated retail prices.

Reviewed.com13 years ago
You Are Here