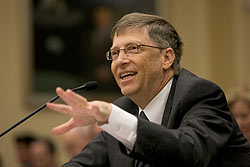 Microsoft Corp. Chairman Bill Gates testified before the U.S. House Committee on Science and Technology on March 12th at 10 a.m. EDT on the future of innovation and U.S. competitiveness. At a hearing to commemorate the committee’s 50th anniversary, Gates focused on issues of U.S. competitiveness, including education and work-force development, the need for immigration reform to allow highly skilled workers to remain in the U.S, and the need to continue to invest in basic research.

In his testimony, Gates addressed the following important areas:

Gates said he is optimistic that information technology will continue to transform business productivity and the quality of our day-to-day lives, adding that private companies alone cannot ensure that the U.S. will remain the pre-eminent force in innovation. “Without leadership from Congress and the president … and the commitment of the private sector to do its part, the center of progress will shift to other nations that are more committed to the pursuit of innovation,” Gates said.

Founded in 1975, Microsoft NASDAQ: MSFT is the worldwide leader in software, services and solutions that help people and businesses realize their full potential.