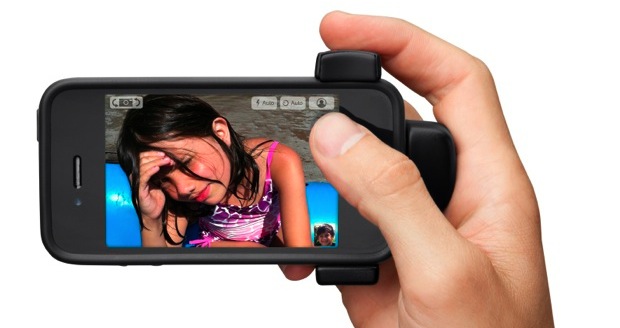 Belkin announced LiveAction Camera accessories for the iPhone and iPod touch which offer a better way to snap photos and record video, along with a new LiveAction App.

“Our new LiveAction Camera App and products enable that spontaneity, but also provide an enhanced camera experience that feels more like that of a traditional point-and-shoot camera. It’s the best of both worlds,” said Jamie Elgie, senior director of Belkin’s mobility division.

With a contoured, soft-touch design and external shutter button, the LiveAction Camera Grip transforms an iPhone or iPod touch into a traditional digital camera, allowing the user to take pictures quickly, easily, and comfortably. The Camera Grip attaches to the charge connector of the device and fits easily over most cases. The integrated tripod mount attaches to any standard tripod for more stabilized control. Separate buttons for photo and video allow the photographer to quickly switch from taking stills to recording live action. The LiveAction Grip requires the use of the LiveAction App. Attaching the Camera Grip immediately activates the app, making it seamless and easy to use on the go.

The intuitive LiveAction Camera Remote wirelessly activates an iPhone or iPod touch camera shutter from up to 30 feet away. Two button controls can instantly switch between photo and video functions. The detachable camera stand props up the device and then slides back onto the remote to create the ultimate pocket-sized camera kit. The Camera Remote requires the use of the LiveAction App.

The free LiveAction App features an intuitive on-screen interface to upload high-quality photos and videos directly onto Facebook or into an email without having to open another program. The app also allows you to capture still photos while simultaneously recording video of the same content so you don’t miss a single moment. Separate photo and video buttons make it easy to switch modes right on screen. In addition to working in conjunction with Belkin’s LiveAction Camera products, the LiveAction App can also be used alone as the primary camera app for the iPhone and iPod touch. The Belkin LiveAction App is free and available for download now at the Apple App Store.