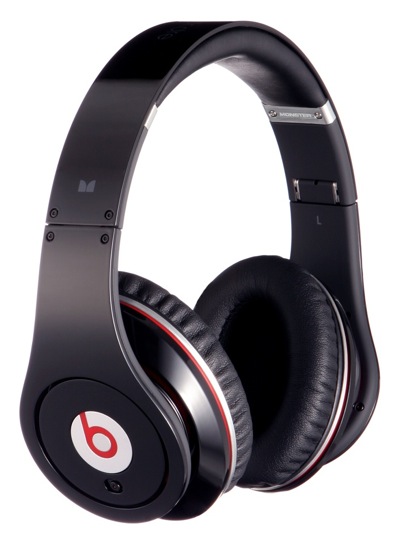 Legendary artist and producer Dr. Dre, Interscope Geffen A&M Chairman Jimmy Iovine and Monster, the leader in audio/video accessories, announced that their new Beats™ by Dr. Dre™ high definition powered isolation™ headphones will be available on July 25th at Apple retail and online stores, Best Buy stores and BestBuy.com, as well as the official website beatsbydre.com, for a price of $349.95.

To provide consumers with a brand new level of headphone audio performance with extreme clarity, deep bass and full power which had been lacking in conventional headphones, Dr. Dre, Jimmy Iovine, and Monster set out to develop a new type of headphone with the capability to reproduce the full spectrum of sound that musical artists and producers hear in professional recording studios.

Noted Dr. Dre: “Artists and producers work hard in the studio perfecting their sound, but people can’t really hear it with normal headphones. Most headphones can’t handle the bass, the detail, the dynamics. Bottom line: the music doesn’t move you. With Beats, people are going to hear what the artists hear and listen to the music the way they should — the way I do.”

Since hearing is believing, Beats™ by Dr. Dre™ headphones are exclusively available at Apple and Best Buy, which are providing special demonstration stations at select stores that give consumers the opportunity to experience the headphones for themselves.

Beats™ by Dr. Dre™ are designed to provide maximum performance when used with all of today’s portable music devices — and they’re being released just in time for use with the new Apple iPhone™ 3G. In fact, for consumers who have an iPhone, Blackberry, and other music-enabled phones, Beats™ By Dr. Dre™ comes with additional Monster iSoniTalk™ headphone cable with integrated high grade microphone and answer button.

“Dre and I have been developing these headphones for a while and in Monster we found a partner that could work with us to crystallize his vision and develop them to the quality level he expects,” said Jimmy Iovine, Chairman of Interscope Geffen A&M Records. “Beats™ By Dr. Dre™ is yet another example of Interscope’s commitment to working together with its artists in developing new avenues to experience music.”

Kevin Lee, VP of Product and Marketing for Monster, noted: “After three years of hard work, we’re extremely excited about launching Beats™ By Dr. Dre™. This is the most advanced headphone ever built and delivers a music experience I think people will find amazing.”

About Dr. Dre
In addition to being a multiple Grammy award winning producer, Dr. Dre is an artist who helped create groundbreaking records with the group N.W.A. and landmark multi-platinum solo albums The Chronic and Dr. Dre 2001. He is currently working on his third and final album, Detox. Dre has also shaped the careers of numerous artists including Snoop Dogg and Eminem, who is signed to Dre’s record company, Aftermath Entertainment. Dre has been associated in producing countless hits for a range of artists including 50 Cent, Gwen Stefani, Mary J. Blige and Eve with a combined worldwide sales total of more than 80 million records sold over the past two decades.

About Jimmy Iovine
Jimmy Iovine is the Chairman of Interscope Geffen A&M Records whose artists include U2, Dr. Dre, Eminem, Gwen Stefani, Fergie, Mary J. Blige, Nelly Furtado and The Black Eyed Peas. Prior to founding Interscope in 1990, Iovine was an acclaimed record producer and engineer and was twice voted Producer of the Year by Rolling Stone magazine. He produced chart-topping albums for artists including U2, Tom Petty & The Heartbreakers, Dire Straits, Bob Seger, Patti Smith and Stevie Nicks and engineered albums for John Lennon and Bruce Springsteen.