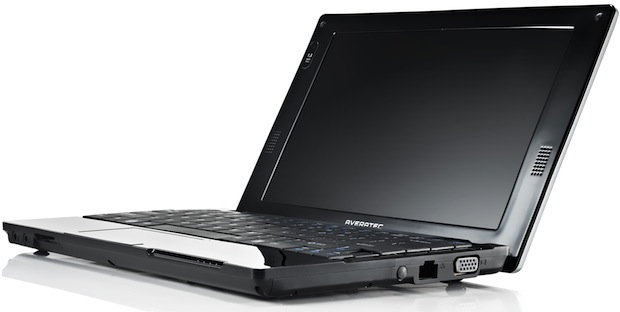 10-inch Netbook with 3 to 6 Hours of Battery Life

TriGem USA just announced the Averatec N1200 Series netbook, the thinnest, lightest 10.1-inch netbook on the market today. The netbook weighs in at 2.2 pounds, measures less than one-inch thick, and offers up to six hours of battery life with the extended battery model. The N1200 will be offered in different models to match a customer’s computing needs and budget requirements, with prices ranging from $329 to $379.

Three models will be offered and feature various configurations based on either the Windows XP Home or Windows 7 Starter operating systems. Extended battery models will also be available to increase battery performance from three to six hours.

To achieve this design, the engineering team at TriGem incorporated materials and components typically found on more expensive ultra-slim notebooks. Cutting-edge technologies such as ultra-slim LED LCDs along with super-slim 7mm hard drives are some of the key components which enable the N1200 Series netbook to be less than one-inch thick. Magnesium-alloy casing and the use of lithium polymer battery cells help to keep the weight down to 2.2 pounds, making it the lightest in its class.

“To build a leading-class netbook, you need to think about how it should be built,” said Bob Davidson, TriGem USA senior vice president. “The lines between low-cost netbooks and ultra-portable notebooks are becoming blurred and consumers are no longer satisfied with mere compact clamshell-shaped netbooks. They want all the premium styling and features found in ultra-portable notebooks but at much more affordable prices.”

The Averatec N1200 Series netbook is available for purchase this month at retail partners such as BestBuy.com, TigerDirect.com and OfficeMax.com.