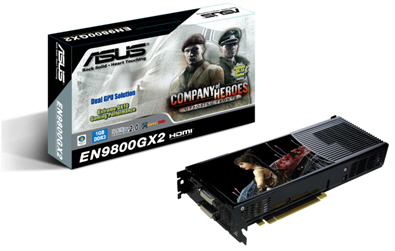 Catering to users who require a graphics card that can provide high definition gaming and entertainment experiences for the PC, ASUS, producer of top notch graphic solutions, has today unveiled the latest generation of NVIDIA GPUs – the Dual GeForce 9800 GPUs, in the form of the ASUS EN9800GX2/G/2DI/1G. This astounding piece of hardware will provide true-to-life extreme HD gaming and picture-perfect HD movie playback, and is also the fastest graphics card available bar-none, with speeds of up to 50% faster than the GeForce 8800 Ultra. Furthermore, the integrated SmartDoctor feature will allow users to overclock the Shader Clock for even better graphical performances; and the ASUS EN9800GX2 will also come bundled with the hottest DX10 game, Company of Heroes: Opposing Fronts.

The World’s Fastest Graphics Solution
The ASUS EN9800GX2/G/2DI/1G features a 1GB framebuffer, and performs 30 to 50% faster across all games than the previous performance leading GeForce 8800 Ultra GPU graphic cards. It is also designed for the new PCI Express 2.0 bus architecture – which offers the highest data transfer speeds for the most bandwidth-hungry games and 3D applications; while maintaining backwards compatibility with existing PCI Express motherboards.

Complete High Definition PC Gaming and Entertainment Experiences
The ASUS EN9800GX2/G/2DI/1G enables smooth gameplay at extreme HD resolutions (up to 2560*1600) with all available in-game settings turned on to the max. An integrated HDMI connector also allows users to send both high-definition video and audio signals to HDTVs via a single cable – eliminating the clutter of multiple cables and wires.

Hottest DX10 Game Bundle: Company of Heroes: Opposing Fronts
Company of Heroes: Opposing Fronts is the new chapter in the highest-rated strategy game that delivers an unprecedented level of game realism. With superb lighting effects, mission persistence, improved vehicle and soldier AI, enhanced physics and a dynamic weather system, this game sets new standards in visual realism for the RTS franchise. With the powerful performance of the ASUS EN9800GX2/G/2DI/1G, gamers will be able to enjoy the full graphical splendor of what the game can offer.