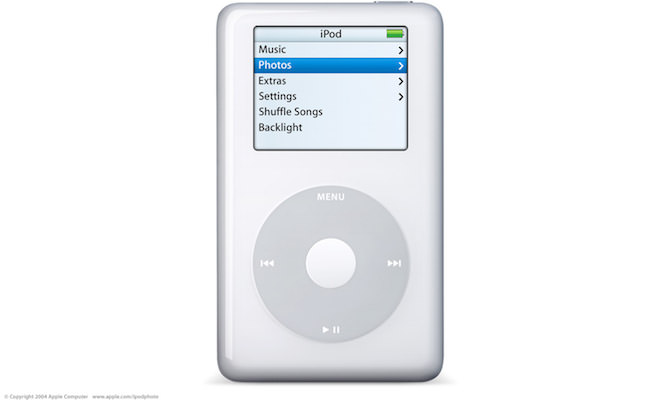 CUPERTINO, California — February 23, 2005 — Apple today updated its iPod photo lineup (also known as iPod with color display) by introducing a new slim 30GB model, holding up to 7,500 songs, for just $349 and a new 60GB model, holding up to 15,000 songs, for $449. Designed to take your entire music and photo libraries with you wherever you go, both iPod photo models feature a stunning high-resolution color screen for displaying photos and enhancing the entire iPod music experience. Both models hold up to 25,000 digital photos and will feature the ability to import photos from your digital camera via the new iPod Camera Connector for instant viewing and slide show playback on iPod photo.

“The new slim 30GB iPod photo at just $349 lets music lovers enjoy their iPod in full color, including album artwork along with their personal photo library,” said Steve Jobs, Apple’s CEO. “And now you can import photos from your digital camera directly into iPod photo with the optional iPod Camera Connector.”

iPod photo works effortlessly with Apple’s iTunes, providing music lovers with access to the iTunes Music Store, the number one digital music service in the world. iPod photo features Apple’s patent-pending Auto-Sync which works seamlessly with iTunes to automatically download an entire digital music library onto iPod photo with just one click, keeping it up-to-date whenever iPod photo is plugged into a Mac or Windows computer using FireWire or USB 2.0, the standard amongst both Mac and PC users to both charge and update any iPod.

Apple’s iPod, the iTunes jukebox and the iTunes Music Store are leading the digital music revolution. With over 10 million iPods sold to date, the iPod is the world’s most popular digital music player, and the iTunes Music Store is the number one online music store with over 70 percent market share. The new iPod photo is a member of Apple’s wildly popular iPod family for both Mac and PC which includes the fourth generation iPod, the iPod mini, the iPod U2 Special Edition and iPod shuffle.

Pricing & Availability
The 30GB and 60GB models of iPod photo (model A1099) for Mac or Windows are available worldwide immediately for a suggested retail price of $349 (US) and $449 (US) respectively, through the Apple Store (www.apple.com), Apple’s retail stores and Apple Authorized Resellers. iPod photo includes earbud headphones, a USB 2.0 cable, a USB power adapter and a CD with iTunes 4.7.1 for Mac and Windows computers.

Optional accessories with the following suggested retail prices include the iPod Dock for $39 (US), in-ear headphones for $39 (US), the iPod Camera Connector for $29 (US) and FireWire cable for $19 (US). Laser engraving is available for iPod for free from the Apple Store (www.apple.com) and can include two lines of text with up to 27 characters per line.

All iPods include rechargeable batteries which have a limited number of charge cycles and may eventually need to be replaced. Battery life and number of charge cycles vary by use and settings. See www.apple.com for more information. Music capacity is based on four minutes per song and 128-Kbps AAC encoding; photo capacity is based on iPod-viewable photos transferred from iTunes.