Apple today introduced the new fourth generation iPod nano, the thinnest iPod ever featuring a sleek new design with a curved aluminum and glass enclosure, in nine vibrant colors. The new iPod nano incorporates Apple’s breakthrough Genius technology which automatically creates playlists from songs in your music library that go great together, with just one click. The new iPod nano also features a refined user interface, a high resolution portrait display and a built-in accelerometer which automatically switches to Cover Flow when rotated and automatically goes into Shuffle™ mode when lightly shaken. The new iPod nano gives users up to 24 hours of music playback or four hours of video playback and is available worldwide immediately in an 8GB model for just $149 and a 16GB model for just $199. Both models come in silver, purple, blue, green, orange, yellow, pink, (PRODUCT) RED and black.

“The iPod nano is the world’s most popular music player and we’ve made it even better for this holiday season,” said Steve Jobs, Apple’s CEO. “We think users are going to love the amazing new design, the automatic Genius playlist creation, as well as automatically going into Cover Flow with just a turn of the wrist.”

The new iPod nano — the thinnest iPod ever — features an elegant new design that beautifully blends a brilliant two-inch display with a gorgeous curved aluminum and glass enclosure. The new contoured design fits even more comfortably in your hand. 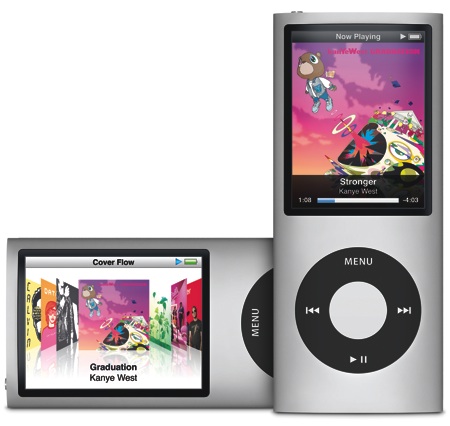 iPod nano works seamlessly with iTunes so you can import, manage and then easily auto-sync your favorite content. You can buy music, video and games for your iPod nano from the iTunes Store with more than 8.5 million songs available for preview and one-click purchase. With up to 24 hours of music playback or four hours of video playback on a single charge, the new iPod nano is the ultra-portable way to enjoy your favorite music, TV shows, movies and games on the go. The 16GB model holds up to 4,000 songs, 14,000 photos and 16 hours of video, and the 8GB model holds up to 2,000 songs, 7,000 photos and eight hours of video.*

The new iPod nano works with the new iTunes 8 Genius feature, allowing customers to automatically create playlists while on-the-go with their iPod nano. Users can preview the playlist Genius creates, refresh the list to choose different songs and save Genius playlists to enjoy again later.

The iPod is the world’s most popular family of digital music players with over 160 million sold. Apple’s incredible new lineup includes the iPod shuffle in four vivid new colors starting at just $49; the iPod classic in one slimline model with 50 percent more capacity for the same great price –120GB of storage for just $249; the fourth generation iPod nano featuring a gorgeous curved aluminum and curved glass enclosure, in nine vibrant colors starting at $149; and the second generation iPod touch now starting at just $229. iPod owners can choose from a vast ecosystem of accessories with over 5,000 products made specifically for the iPod including speaker systems, fitness accessories, fashionable cases and iPod connectivity available in over 90 percent of new car models sold in the US.

Pricing & Availability
The new iPod nano is available immediately for a suggested price of $149 (US) for the 8GB model and $199 (US) for the 16GB model through the Apple Store (www.apple.com), Apple’s retail stores and Apple Authorized Resellers. Both capacities come in silver, blue, purple, green, orange, yellow, pink, (PRODUCT) RED and black. iPod nano requires a Mac with a USB 2.0 port, Mac OS X v10.4.11 or later and iTunes 8; or a Windows PC with a USB 2.0 port and Windows Vista or Windows XP Home or Professional (Service Pack 3) or later and iTunes 8.

Apple new iPod touch isn't for the converted; it for the nonbelievers

The Verge2 years ago

Apple Has A New iPod Shuffe And It Talks [UPDATED x2]

The IT Nerd12 years ago
You Are Here