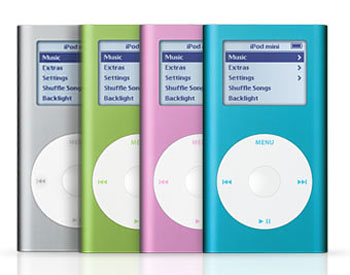 “The iPod mini is now available at the magic price point of $199,” said Steve Jobs, Apple’s CEO. “At this breakthrough price point, and with more than twice the battery life, the new iPod mini should appeal to even more music lovers.”

iPod mini works effortlessly with Apple’s iTunes, providing music lovers with access to the iTunes Music Store, the number one digital music service in the world. iPod mini features Apple’s patent-pending Auto-Sync which works seamlessly with iTunes to automatically download an entire digital music library onto iPod mini with just one click, keeping it up-to-date whenever iPod mini is plugged into a Mac or Windows computer using USB 2.0. In addition to keeping the iPod mini up-to-date, plugging directly into the USB 2.0 port will also conveniently charge the iPod mini–so, one connection does it all.

Apple’s iPod, the iTunes jukebox and the iTunes Music Store are leading the digital music revolution. With over 10 million iPods sold to date, the iPod is the world’s most popular digital music player, and the iTunes Music Store is the number one online music store with over 70 percent market share. The new iPod mini is a member of Apple’s wildly popular iPod family for both Mac and PC which includes the fourth generation iPod, the iPod photo, the iPod U2 Special Edition and iPod shuffle.

Pricing & Availability
The 4GB and 6GB models of iPod mini for Mac or Windows are available worldwide immediately for a suggested retail price of $199 (US) and $249 (US) respectively, in a choice of silver, pink, blue or green through the Apple Store (www.apple.com), Apple’s retail stores and Apple Authorized Resellers. iPod mini includes earbud headphones, a belt clip case, a USB 2.0 cable, and a CD with iTunes 4.7.1 for Mac and Windows computers.

An optional USB power adapter is available for $29 (US) which easily charges iPod mini when traveling. Other accessories include the iPod Dock for $39 (US) for desktop syncing and charging, in-ear headphones for $39 (US), an arm band for $29 (US), a lanyard for $19 (US) and FireWire cable for $19 (US). Laser engraving is available for iPod mini for free from the Apple Store (www.apple.com) and can include two lines of text with up to 23 characters per line.