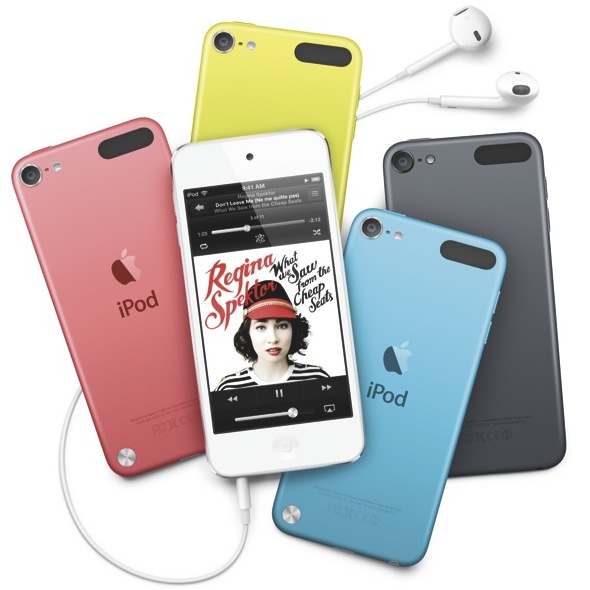 Apple today introduced its 5th-generation iPod touch featuring a 4-inch Retina display; a 5-megapixel iSight camera with 1080p HD video recording; Apple’s A5 chip; Siri, the intelligent assistant; and iOS 6. Spec-wise it is not up to par with the new iPhone 5, but should be plenty powerful, plus it comes in a gorgeous new ultra-thin and light anodized aluminum design, and for the first time ever, iPod touch comes in five vibrant colors.

The new iPod touch has been redesigned with a brilliant 4-inch Retina display in an ultra-thin and light anodized aluminum body–the thinnest iPod touch ever at just 6 mm thin and weighing just 88 grams. With Apple’s dual-core A5 chip inside, iPod touch delivers up to twice the processing power and up to seven times faster graphics than the fourth generation iPod touch, all while maintaining incredible battery life of up to 40 hours of music playback and up to eight hours of video playback.* And, for the first time ever, iPod touch is available in five vibrant colors.

The new iPod touch includes a 5-megapixel iSight camera with autofocus, support for 1080p video recording with video image stabilization, face detection and an LED flash, and the new panorama feature that lets you capture gorgeous panoramic photos by simply moving the camera across a scene. Every new iPod touch comes with a color-matched iPod touch loop, a clever and convenient wrist strap you can use while taking photos, recording video and playing games.

The new iPod touch comes with iOS 6, the world’s most advanced mobile operating system with over 200 features, and for the first time, features Siri, the intelligent assistant that helps you get things done just by asking. Siri arrives on the new iPod touch with support for more languages, easy access to sports scores, restaurant recommendations and movie listings. The new iPod touch also includes: built-in Facebook integration with ability to post directly from Siri; Shared Photo Streams via iCloud; and other key iOS features like iMessage, FaceTime, Mail and Game Center. Now you can wirelessly display your iPod touch screen right on your HDTV with AirPlay Mirroring, allowing you to stream photos, videos, music, apps and play games on your big screen TV.

The iPod touch comes with the new Lightning connector that is smaller, smarter and more durable than the previous connector. The all-digital Lightning connector features an adaptive interface that uses only the signals that each accessory requires, and it’s reversible so you can instantly connect to your accessories. The Lightning-to-30-pin Adapter is also available to connect iPod touch and iPod nano to legacy 30-pin accessories.