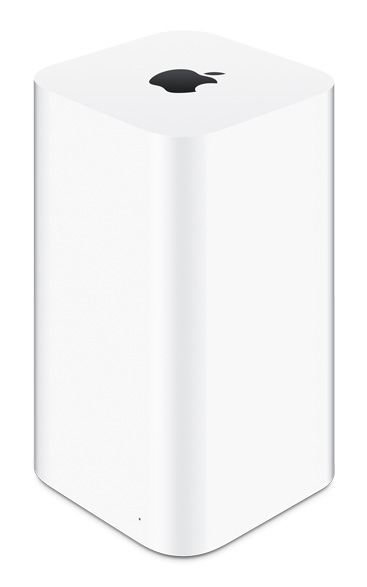 Apple today introduced completely redesigned AirPort Extreme and AirPort Time Capsule base stations featuring 802.11ac Wi-Fi for up to three times faster performance with a maximum data rate of 1.3Gbps. Interesting, both look identical, have the same ports and provide the same wireless routing. However, internally Time Capsule includes a built-in hard drive for backup storage too. The new AirPort base stations include high-powered radios and a six-element beam-forming antenna array to maximize range and performance. With setup built right into OS X and iOS, users can create a high-speed Wi-Fi network in just a few clicks, and the intuitive AirPort Utility makes it easy to view and manage a network graphically. Featuring 2TB or 3TB hard drives, AirPort Time Capsule works in conjunction with Time Machine in OS X and is the simplest way to wirelessly backup multiple Macs. Measuring just 3.85-inches by 3.85-inches and 6.6-inches tall, these new base stations can be placed almost anywhere in the home.

Apple claims the new vertical design not only improves Wi‑Fi performance, but also saves valuable desk space. At less than 4 inches square, the footprint of each 66 to 75 percent smaller than their predecessor. To further de-clutter your desk, Apple made sure the power supply is also built-in.