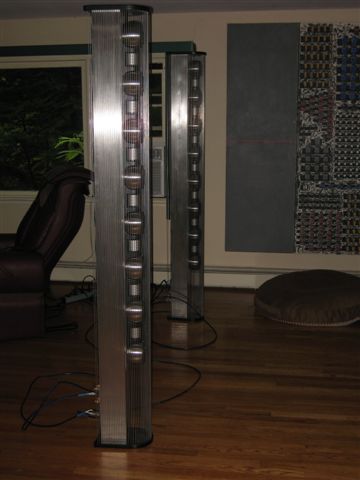 LAS VEGAS, January 8, 2007–Anthony Gallo Acoustics (AGA), an award-winning manufacturer of high-end stereo and home theater speakers, will display and demo – for the first time ever – its all-new Reference 5LS line source loudspeaker at CES 2007 in the Venetian Hotel in room #34-310. Scheduled to be released to the public in the third quarter of 2007, the towering speaker stands 78″ tall, boasts an incredible 12 custom aluminum 4″ woofers and features seven of AGA’s proprietary CDT II tweeters, which possess power-handling, off-axis response and efficiency that approach the textbook definition of ideal. In addition, the Reference 5LS has eight 4″ carbon fiber midrange drivers, each housed it its own 5″ spherical enclosure.

“The Reference 5LS is really the ‘big brother’ of our flagship Reference 3.1,” states Anthony Gallo, award-winning speaker designer and founder of AGA. “While it’s not completely omni-directional, it is the closest any line source has ever come to being omni-directional. This loudspeaker is the culmination of more than 25 years of loudspeaker design research. After a lengthy development cycle, we’re extremely excited to unveil our new flagship to the public at the CES show.”

Many line sources horizontally offset their various drivers, but AGA alternates tweeter cylinders with mid-range spheres – one atop the other – in perfect vertical alignment. Because of this, the phase and dispersion problems caused by driver offset are entirely eliminated.

Capable of being driven by a single, capable amplifier, the 5LS offers the options of bi- or tri-wiring, as well as bi- or tri-amping. Although capable of handling massive power, the crossover-less design and high efficiency of both the CDT II tweeters and carbon-fiber midrange drivers are perfect matches for low-powered, high-performance amplifiers. The first-order low-pass filter used for the bass drivers (The only crossover employed in the 5LS) can be bypassed, enabling the LF enclosure to be driven from the LFE output of a processor, or from a separate amplifier.

At 7″ wide by 11″ deep, the Reference 5LS sports quite a slender profile. The twelve 4″ woofers fire out the back and equal the cone surface of a 15″ subwoofer, while offering speed and transparency that a large single driver cannot match. In addition, the Reference 5LS features AGA’s patented S2 Technology, as well as their trademark spherical enclosure, which eliminates any external diffraction.

For even more groundbreaking performance, the company’s optional Reference SA amplifier, which features volume, phase and crossover adjustments, is ideal for this application. The Reference SA allows the speaker to be placed for optimal imaging and soundstaging performance, and then fine-tuned for bass using the SA’s control facilities.

About Anthony Gallo Acoustics:
Anthony Gallo, who created his first loudspeaker at the age of 14, has been raising the bar in loudspeaker design for more than 25 years. He formed Anthony Gallo Acoustics (AGA) in the early 1990’s in order to bring his creations to the marketplace. His first commercially available product, the Nucleus Solo loudspeaker, went on sale in 1994. The speaker, which contained the unique blend of creative industrial design and top-quality sound components that quickly became an AGA trademark, was an immediate success. Today, AGA’s products are sold in over 40 countries, including a complete line of stereo speakers, home theaters speakers & systems, powered subwoofers and installation accessories to complement their award-winning speaker systems.