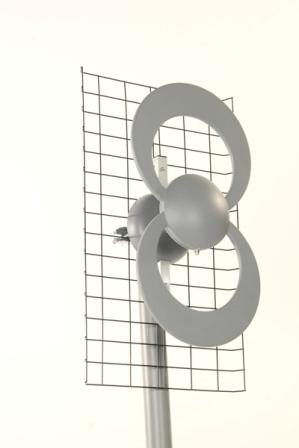 ClearStream2 is Antennas Direct’s latest model of digital TV antennas, which are optimized specifically for the 2009 digital conversion.

“The ClearStream2, which is the first in a series of ClearStream DTV antennas, is unmatched in size and performance,” said Antennas Direct President Richard Schneider. “Demand for ClearStream2 is high because of its strength, reliability and small form.”

The first DTV antenna created with the latest simulation software and test equipment, the ClearStream2 is designed to receive digital, over-the-air broadcasts, with a range up to 50 miles. Its wide, 70-degree beam width allows it to capture signal from towers spaced far apart, and its patented, tapered-loop design is 50 percent smaller than previous models.

“This represents a breakthrough in antenna design. There hasn’t been significant change in TV antenna technology for the past 30 years,” Schneider said. “Although television broadcasts have changed — with the introduction of digital programming — antenna design has been stagnant. Antennas Direct was founded to foster research and development of stronger, more-efficient antennas designed specifically for digital television.”

After the nationwide switch to digital broadcasting in February 2009, millions of Americans who still rely on over the air broadcasts will lose picture unless they purchase either a converter box or a new digital television.

“Since most antennas on the market were created for a different era, people may require an updated antenna once the 2009 digital transition occurs,” Schneider said. “We continually educate the public regarding the type of antenna they will need to receive digital television and how to install it.”

Antennas Direct provides customers with a 90-day, no-fault return guarantee on all Antennas Direct antennas and a lifetime warranty against failure, corrosion, defects in materials or workmanship.

If you’d like more information about this topic, or to schedule an interview with Richard Schneider, please call Scott Kolbe at 636-379-3895 ext 13 or send an e-mail to scott@kolbeco.net

About Antennas Direct
Antennas Direct is a St. Louis-based manufacturer and distributor of over-the-air antennas. The company was founded by Richard Schneider in 2003 and has since been widely recognized for superior product design and performance by a number of industry publications and main stream media outlets. Having invested major resources into the discovery and implementation of new technological advances in television antenna design, Antennas Direct continually tests and modifies antenna designs, raising the bar by which antenna performance and appearance are measured. For additional information on Antennas Direct, visit
http://www.antennasdirect.com/index.html