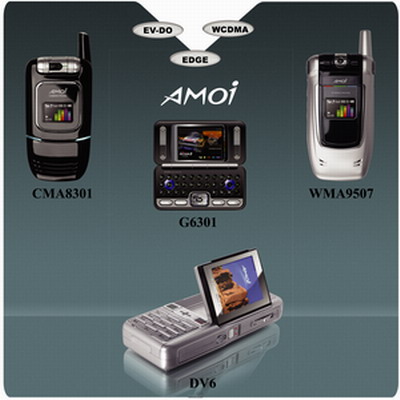 There’s a dramatic and interesting phenomenon at 2004 China International Telecommunications Equipment and Technology Exhibition opened on Oct. 26th in Beijing that the very last year, Chinese mobile phone manufacturers appeared to be silent at International Telecom Exhibition compared with their perky confidence in the market, while after they experienced laggard increase and rebounce of foreign brands in market throughout this year, surprisingly, they presented unexpected highlights at the exhibition. Amoi Electronics, a local mobile phone manufacturer which is renounced for its market share and product advantages, showcased 3 new 3G mobile phones with three different standards and a series of mega-pixel cell-phones at the exhibition for the first time, which becomes a highlight of this exhibition.

Amoi Electronics introduced more than 30 models of new mobile phones at the exhibition, which ranks No.1 in product kinds among its Chinese counterparts. This impressive number predicates technology accumulation of Amoi has achieved a new harvesting season. Mr. Li Xiaozhong, president and CEO of Amoi, appeared to be quite confident when showed up at the Amoi booth which stands at a prime location of No.2 exhibition hall. Li said, “The distance between Chinese and foreign mobile phone manufacturers is getting minor in terms of 3G technology development. 3G mobile phone provides a remarkable chance for Chinese manufacturers getting out of the market plight. Mega-pixel mobile phones are getting hot on market. Amoi is not the No.1 in launching mega-pixel phones. But market performance has the final say. Our introducing this impressive lineup of mega-pixel series as scheduled is a symbol of the counterpunch that Amoi is undertaking.”

In the product launch conference that was held in the afternoon of the exhibition opening, Amoi announced its 3G strategy, which is the simultaneous development of 3 different technology standards: TD-SCDMA, WCDMA and CDMA2000. In the field of TD-SCDMA, Amoi is an important member of TD-SCDMA Industry Alliance and one of the TD-SCDMA terminal development manufacturers that Ministry of Information highly supports. While in the field of WCDMA, Amoi has enjoyed long-term cooperation with Ericsson, a leading player of this standard, cooperation ranging from kinds of circles such as 2G, 2.5G and 3G. In addition, Amoi has signed a strategic contract with Qualcomm Technology in the development of 3G mobile phones based on CDMA2000 standard. Accordingly, Amoi was one of the first OEM to track and invest on 3G, and it’s ready to technology development, product testing, manufacturing and etc. “Amoi 3G mobile will be realized mass production ahead of trial commercial operation of 3G network.” Mr. Li Xiaozhong said.

Except for the launch of 3 models of 3G mobile phones with different technology standards, Amoi also introduced 7 models of mega-pixel mobile phones, ranking No.1 in presenting such kind of phones among Chinese manufacturers. Undoubtedly, these 7 models are a big bomb in the market. The new series includes high end DC phone for male consumers, phone for female consumers and DV phone, all developed by Amoi independently. Amoi personal handset system (PHS) phones including Intelligence series, Splendor series, Metropolis Upstart series and Fashion series were presented at the exhibition as well.

With complete product line and high quality, Amoi becomes the most vibrant player in market. Setting 3G mobile phone as vanguard, the mega-pixel series as the main force, Amoi counterpunch lineup is ready. Taking this exhibition as a juncture, an intensive market battle with technology as key weapon is brewing.