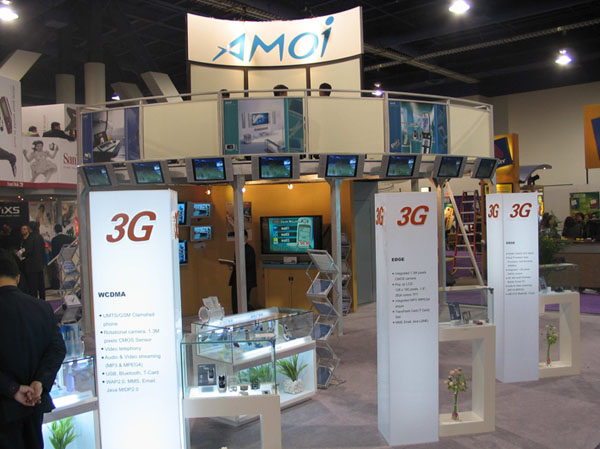 Founded in 1981, Amoi Electronics is a leading electronic manufacturer that owns 20,000 employees. While focusing on wireless communication handsets, Amoi has diversified its business to computer and consumer electronic products. The diversification strategy of Amoi could be expressed as “3S” which is the abbreviation of “3 Screen” Amoi believes that with the mergence of communication, consumer electronics and IT in the aspects of technology, standard, function design and application, the present division standard could no longer meet the trend of 3C integration, while to label different products in accordance with their different use will be better complying with the core feature of 3G.

Amoi defines the 3C products applied in certain environment as large screen products, such as high-end TV with multimedia and communication features; notebook computer could be defined as medium screen ones, while such portable products as 3G mobile phones are the small screens.

As one of the first Chinese manufacturers who have been following 3G from early stage, Amoi has established profound and long-term cooperation with Ericsson, the main innovator of 3G, in an extensive field covering 2G, 2.5G and 3G. On the 3G Conference, 2004, Amoi signed a strategic cooperation agreement with QUALCOMM Incorporated (NASDAQ: QCOM) for further development of CDMA2000?1xEV-DO devices. During CES2005, it had also presented several series of its 3G phone to the public, among which WMA9507 and CMA8301 were most impressive. Integrated with a 1.3M pixels CMOS camera, the A/V functions of WMA9507 are amazingly strong, supporting various formats, including MPEG4, MP3 AND AAC. Besides, it is supportive to WCDMA 2100Mhz and GSM 900/1800/1900MHz, Bluetooth, T-Flash card slot and USB data transmission as well as video streaming playing and videophone among multi-parties under appropriate conditions. While the dual-model phone CMA8301 is supportive to CDMA 95/1X/1X EV-DO800/1900MHz and GSM/GPRS 900/1800MHz.

With regard to 2.5G mobile phones, Amoi adopts the strategy of developing different product series to cater demand of each market segment? and has launched sliding series, rotating series, multi-media series, female handsets and mega-pixel camera phones according to individual needs of the crowd, which also expresses its technical power and developing potential. Among these series, the female handsets (Rosemary series) and mega-pixel camera phones will be especially competitive in the coming months, and the latter, with a retail price of less than 3000 RMB, is playing the role of a market killer in the mega-pixel camera phone market of China. Besides, the smart handwriting multimedia phone M8, camera phone DV6 and smart phone E8 have also demonstrated the innovation and systematization ability of Amoi in research and development.

In the field of consumer electronics, Amoi will focus on LCD and DLP rear projector TV. The high-end LCD TV presented on CES had super candid pictures and clear video signals for the application of the self-developed 4:4:4 dynamic real-color technology. Amoi LCD has always been the representative of high-end TV, and recently, with the adjustment of marketing strategy, it has gained an increasing influence in domestic market.

Amoi notebook computer highlights the strategy of self-research and coherent-manufacture. Under this guideline, Amoi notebook computer is able to catch and satisfy the demands of consumers, guarantee the quality of its production, lower the cost and promote the service level. After the success of V3, Amoi notebook computer V8 adopting the latest Intel Centrino technology showed up on the CES for the fist time. Integrated with Intel Dothan LV CPU and Alviso chipset, V8 identifies 533MHz-DDR2 as well as 400MHz-DDR2 Front Side Bus and is supportive to high-speed PCI-Express. Amoi V8 is the very first self-developed domestic notebook standing the pace of worldwide PC release, which starts a new age of domestic notebook and well expresses the manufacture ability of Amoi.

CES, started in 1967, is the supreme consumer electronic exhibition worldwide, and it was born as the first choice of consumer electronics. According to Amoi, 2005 will mark the beginning of its internationalization strategy, while the CES will be the initial step.