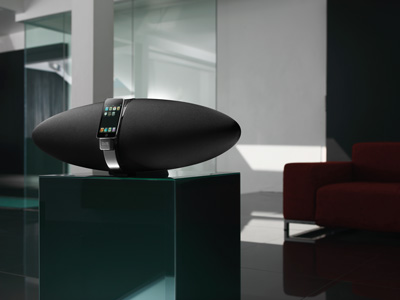 N. Reading, MA–August 2008–Knowledgeable designers are very careful about loading up a room with the bulk and busy-ness of high-tech audio–and with good reason. And yet many of these very same interior artists are willing and even eager to accommodate a Zeppelin in their designs.

The Bowers & Wilkins’ Zeppelin is from the world leader in high-end loudspeakers for serious music and home-theater fans. The British firm’s beautifully formed and crafted, highly compact one-piece Zeppelin iPod Speaker System has already won over the audiophile community with its jaw-dropping sonic abilities. Now it is taking the interior-design world by storm, with debut installations in a growing number of impressive boutique hotels, including Hong Kong’s Mandarin Oriental Landmark and the chic new dana Hotel & Spa in Chicago. Its’ taken home several awards as well, including a 2008 International Design Excellence Award (IDEA) Gold from the Industrial Designers Society of America. One judge wrote, “This is brave design–high performance sound in a user-friendly, blatantly different and very well detailed ‘package.’” (Zeppelin’s other awards include, the 2008-2009 Best Product award from EISA (European Imaging and Sound Association, the 2008 MacWorld award for Best Consumer Audio Product and the Robb Report Home Entertainment’s 10 Best Design award for 2008).

Zeppelin encompasses advanced digital signal processing, three-channel amplification totalling 100 watts, and integrated speakers-subwoofer utilizing Bowers & Wilkins’ famed Nautilus reference-grade technologies. A “floating,” polished stainless steel arm holds the iPod in an ergonomic, easy-operating position, while highlighting its own design and preserving familiar access for a fully intuitive user experience. A smart 30-pin docking port accepts (and charges) all current and recent iPods and iPhones without adapters or interchangeable bases, thanks to unique, spring-loaded design. A full range of connections including USB, aux-audio, and video outputs extends Zeppelin’s value to a host of potential uses. Zeppelin is also world-ready, as the power supply works on voltages virtually anywhere–and the speaker system automatically enters power-saving “sleep” when the iPod is removed (for example, as one grabs it in rushing out the door).

Striking but simple design, high-quality materials and world-leading technology come together to deliver musical detail beyond expectations. Zeppelin’s confident, individual design statement emphasizes the premium quality and brand values of Bowers & Wilkins and complements the design language of the Apple iPod docked to it.

Home > Latest > New Products > A Zeppelin in the Livingroom