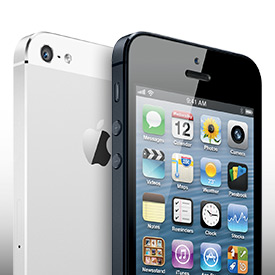 T-Mobile announced today it will finally sell the iPhone 5 for what appears to be the lowest price anywhere — just $99.99 with no-contract, and $50 monthly unlimited 4G talk/text with 500GB data plan. However, like any good deal there is always a gotcha somewhere. In this case it’s an extra $20 month add-on fee for two years. Consumers can add 2GB of 4G data for $10 per month per line or get unlimited 4G data for an additional $20 per month per line. Customers can add a second phone line for $30 per month, and each additional line is just $10 per month. There are no caps and no overages. Once rate plan allotment of high-speed data has been consumed, customers will experience reduced Web speeds without overage charges for the remainder of the billing cycle.

Breaking out the hodgepodge of numbers, the cheapest plan for one line with iPhone 5 is $70/month, while the most expensive plan with unlimited data is $90/month. Nonetheless, a pretty good deal compared the competition. Sprint’s unlimited plan will cost $30 more a month and a two-year contract. In addition, T-Mobile will offer iPhone 4 and 4S at reduced pricing.

About iPhone 5
iPhone 5 is the thinnest and lightest iPhone ever, completely redesigned to feature a stunning 4-inch Retina display, an Apple-designed A6 chip for blazing fast performance and ultrafast wireless technology — all while delivering even better battery life. iPhone 5 comes with iOS 6, the world’s most advanced mobile operating system with over 200 new features, including Shared Photo Streams, Facebook integration, all-new Maps app and Passbook organization, and even more Siri features and languages.