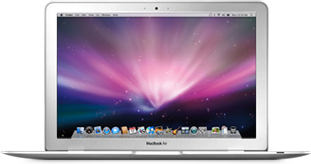 MacBook Air
Apple introduced the world's thinnest notebook, a MacBook that measures only .16 inches at its thinnest point. It features a 13.3 inch LED-backlit widescreen display and five hours of battery life. The trackpad supports finger gestures for pinching, rotating and swiping on-screen elements. The computer lacks an optical drive but software allows users to "borrow" the drives of other networked computers (including PCs) for burning. It includes a 1.6 GHZ Intel Core Duo 2 processor, 2GB of memory and an 80 GB drive. For an extra fee, users can trade the 80 GB drive for a 64 GB SSD. It costs $1,799 for the base model. But, set up the way anybody who needs a computer would have to set it up, it's a $4,000 1.6Ghz, 64GB box. The same 4k buys you a mind-blowing Vista box or a smokin' MacBook Pro. Try as I might, I just can't figure out who would consider this a useful device. I love the way it looks, but for the same price, I'm carrying a true desktop replacement in my briefcase. 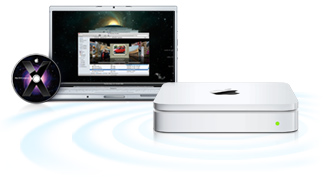 Time Capsule
Time Capsule is an Airport base station with a hard drive that wirelessly (and automatically) saves backups for computers on the network. It comes in 2 sizes – 500 GB ($299) and 1 TB ($499). This is actually a wonderful idea and it is properly priced. But, it is not the kind of announcement that makes a Macworld Keynote speech memorable.

iPhone and iPod Touch Software updates
The iPhone software will be updated to include Maps with location triangulation, Web Clips and support for iTunes movie rentals. Users can now personalize the iPhone home screen and create multiple home screens (similar to the Spaces feature in Leopard). The update is free.

My feelings about the iPhone and its related products are well known. As I have often said, I never ended an iPhone call with "goodbye." It was always, "Hello? Hello?" Until they get real search and email threading happening for the iPhone and, oh yeah, get a real carrier with real minutes (AT&T has anytime minutes, that's anytime you can get a signal!), the iPhone is a non-starter.

iTunes Rentals
Apple announced iTunes movie rentals with support from all the major studios. DVD-quality rentals will cost $2.99 for library titles and $3.99 for new releases. The service launches today and expects to have 1,000 titles available by the end of February.

Apple TV has been updated to include support for direct rentals — including ones in high-definition with Dolby 5.1 surround sound. HD rentals will cost $3.99 for library titles and $4.99 for new releases. HD rentals can only be obtained through Apple TV and cannot be transferred to iPods or Macs. 100 titles will be available on launch. The price of the AppleTV was dropped to $229.

Users have 30 days to start watching a rental and 24 hours to finish once it has begun.

Twentieth Century Fox and Apple also announced "Digital Copy for iTunes," a file that will be included on DVD releases of Fox movies. The copy can be transferred to iTunes, iPods, iPhones and AppleTV.

Of all the announcements at Macworld 2008, this is perhaps the most profound. Again, it is not immediately a game-changer. For the few of us who own AppleTV boxes (yes, I have one), this is an excellent consumer value proposition. I don't have any other way to rent movies in HD. My Time Warner Cable VOD is SD (and it only works when it works) and I have been reluctant to purchase an HD-DVD or BluRay player during the format war (I'll be buying a BluRay player this weekend).

The movie studios like this, I like it! However, Wall Street didn't seem to like it at all. Apple shares were down $9.74 to $169.04 the day after Steve's speech.

I really wanted to see something really great and useful from Apple this week. On the top of my wishlist was a true sub-notebook. Something I could throw in a portfolio or briefcase for short hops. I was also hoping that the iPhone software update would take the phone where it needs to go. Ces't la vie.

So, what comes after the Applezoic era? That's simple – we are now firmly in the Googlezoic during the Service Layer Epoch. So many different ecosystems are popping up, it's hard to imagine what the world will look like for next year's speech. Help us Obi-wan SteveJobi, you're our only hope.