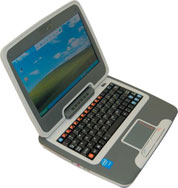 It Depends on Who Uses Them for What

PC makers Hewlett-Packard, Dell, Lenovo, Acer and Asus are increasingly thinking big about small netbooks — portable computing devices that can cost anywhere from $200 to $500 and depend on the Internet for many computing tasks.

These small devices are a bright side to what analysts expect will be a slow year ahead for computer demand. Indeed, research firm iSuppli on November 20 projected that global PC shipments will rise 4.3% in 2009, down from its previous forecast of 11.9%. iSuppli also reported that notebook shipments will still increase 15% in 2009 largely because of growth in the netbook segment. Research firm IDC estimates that 10.8 million netbooks will ship in 2008, just about a year after Asus launched what is considered the first device in the category, the Eee PC. Asus has a 46% share of the netbook market, according to IDC.

The netbook has been championed by Intel, which created a line of microprocessors, called Atom, to control them. However, the term "netbook" is often used to refer to a broad range of devices. Netbooks are mobile computers with screens ranging from 5 inches to 10 inches. Originally intended principally for the education market, they typically run Linux or Windows XP and need to connect to the Internet for heavy computing tasks. The terms "netbook" and "mini-notebook" are often used interchangeably. Prices generally are lower than $500 and, in some cases, consumers can buy them at toy stores. For instance, Asus' Eee PC is sold at Toys "R" Us.

Analysts and experts at Wharton agree that netbooks will be disruptive to the PC industry, but it's not clear in what way. Will netbooks poach sales of laptops? Are netbooks replacements for smartphones? To what extent will the weak economy affect sales? Will netbooks increase the popularity of cloud computing in which users store files on the Internet and manage them with web-based applications? And how will netbooks impact the business models of key players such as Microsoft, Intel and other industry leaders? Meanwhile, the idea that a computing device will depend on the Internet for computing power isn't new. So-called thin clients — terminals which depend on networks for access to applications — have been around for years and are championed by companies such as Wyse Technologies.

It's too early to know where netbooks fit or how well they will ultimately sell among consumers, who are projected to buy about 70% of these devices, according to research firm Gartner. Technology vendors such as Intel and Dell expect netbooks to fit in between smartphones and laptops. In their view, netbooks will become primary computing devices in emerging markets and complements to traditional PCs in developed markets.

Eric Clemons, an operations and information management professor at Wharton, says "most of us now have, and now need, a continuum of devices." Clemons uses his iPhone for "messages, entertainment and boredom relief on flights or in some pointless meetings," while his laptop is for document preparation or serious work. "My guess is that a netbook will be somewhere in between," says Clemons, acknowledging, however, that it is unclear what ramifications netbooks will have. "If netbooks rely on the Internet too much, they will not replace the laptop. If they are too clunky, they won't replace the phone. On the other hand, netbooks may actually compete [with both]."

Gartner notes in a recent research report that it is also possible netbooks will be viewed as deficient by consumers, who expect the capabilities of a fully featured PC.

Disruptive or Complementary?
Karl Ulrich, an operations and information management professor at Wharton, suggests that it's far too early to determine how netbooks will be received, but predicts the category is likely to be disruptive on many fronts. "There is currently a market segment that values ultra portability. That segment is making do with a combination of a laptop and [smartphone]. A device that offers greater portability will cannibalize" both laptops and smartphones. "New-category products are generally unpredictable, and I expect the situation with netbooks will be no different."

Indeed, technology vendors are also at a loss to assess the impact of netbooks. On a conference call in October, Microsoft CFO Chris Liddell said netbooks presented a wild card to the software giant's earnings because many of the small devices use a discounted version of Windows SP, which generates less licensing revenue per unit compared to traditional laptops or desktop PCs."At this stage, it is too early to determine the extent to which the new netbooks segment is cannibalizing the traditional consumer PC market sales or simply capturing a new market opportunity, so we believe that there are likely aspects of both." He added that netbooks have "lower average selling prices than our historical average selling price."

Morgan Stanley analyst Adam Holt acknowledges the risks and rewards to Microsoft. "While netbooks should spur PC growth medium term as consumers adopt them for their secondary or tertiary PCs, they will cannibalize traditional PC sales to some degree. The rate at which Windows is installed on netbooks is approaching what Microsoft sees for PCs, but Microsoft derives lower price points for netbooks," wrote Holt in a research note. Experts at Wharton say that netbooks could help profits at technology companies by providing a buffer to slowing PC demand overall. However, if consumers ultimately view netbooks as substitutes for pricier models, profit margins could fall. Gartner has noted that netbooks could be a boon to open source software such as Linux. Indeed, some mini-notebooks from Dell are packaged with Ubuntu, a Linux operating system.

For wireless carriers, the devices may be another excuse to sell additional services. For instance, Vodafone subsidizes Dell's Mini 9 netbook in Europe as long as customers sign up for a wireless service contract.

Meanwhile, these small devices are proliferating. Qualcomm, a wireless semiconductor company, announced plans in November to launch its own designs for a "PC alternative" that would compete with netbooks. Qualcomm's device, code-named Kayak, is being tested in Southeast Asia in early 2009.

Kendall Whitehouse, senior director of information technology at Wharton, says it's possible that these netbooks will converge with the smartphone and laptop markets. "Is there a market in between [smartphones and laptops] or do netbooks get absorbed into one end or other?" he asks. "High end smartphones get better and better and are moving up the chain in terms of features and performance. Laptops are getting smaller and lighter. Netbooks could get squeezed between the two."

Seeding the Cloud
According to Wharton legal studies professor Andrea Matwyshyn, the success of netbooks may ultimately rely on always-on Internet connections. Since these small PCs lack significant storage, they largely depend on the Internet to access content and documents. "Once Internet connectivity gets to the point where it's everywhere, these devices become more viable," she says. "Dark spots and dead zones in wireless coverage are a hindrance to the netbook market. These problems exist for cell phones, too." But netbooks, which rely on the Internet to be useful, lose appeal without that Internet connection, Matwyshyn adds.

Yet Wharton operations and information management professor Kartik Hosanagar says the importance of netbooks goes beyond just connectivity. If netbooks become popular, they could take cloud computing mainstream. Microsoft, Google, Amazon and startups like Zoho are offering — or plan to offer — cloud computing services. "If you think of what people do with their computers, it includes a) storing data and b) installing and using applications. Cloud computing will reach the masses on both these dimensions, and netbooks go hand in hand [with this]. More consumer data will move online [or into the cloud]. Users are now more comfortable with their data living in the cloud. Having your data online lets you do things like sharing it easily with your friends and accessing it anywhere." And as consumers get accustomed to cloud computing, the urge to buy computing devices with a lot of storage and other bells and whistles diminishes, says Hosanagar.

Technology companies are already pitching online storage services bundled with netbooks. For example, Dell bundles online storage from Box.net with its miniature computing devices. According to Hosanagar, netbooks and cloud computing could feed off each other and spur demand. "The netbook market will continue growing due to the advances in cloud computing," he predicts. Other experts at Wharton, however, aren't so sure. "I don't see cloud computing as essentially coupled to the netbook phenomenon," says Ulrich. "Netbooks are just really small, light computers. They generally can be configured with a lot of mass storage and they can run Windows. They don't require the cloud for full functionality. Conversely, the cloud can benefit desktop and laptop computers as well. I don't think the trends of netbooks and the cloud are necessarily tied together."

The Net Big Thing? Not Quite Yet
While netbooks are showing early popularity, experts at Wharton stopped short of declaring these devices to be runaway hits. They point out many uncertainties.

The first worry is the economy. To be sure, netbooks are inexpensive, but they are also a largely discretionary purchase at a time when the global economy is struggling. In developed markets, like the U.S. and Japan, netbook purchases could be delayed.

Another question is whether netbooks are really suited for emerging markets, as early proponents contend. In the U.S., netbooks can find Internet connectivity through multiple means, but the emerging markets are different. Ubiquitous Internet access may be a more fundamental concern than the availability of cloud-based software programs. "Connectivity varies by the locality," says Whitehouse. "The question to ask is whether there is connectivity — not necessarily whether there are cloud-based applications."

Clemons adds that the appeal of netbooks may not conform to the requirements of technology firms. "The real use of netbooks may be for the amusement of bored teenagers whose needs for connectivity and diversion cannot be satisfied with an iPhone, [which is] not exactly a market that I expect to see emerging in the developing world."

Matwyshyn has more practical concerns. Netbooks are tiny relative to traditional laptops — sometimes too small for everyday computing. "If netbooks enter an emerging market with too small a keyboard that's difficult to use, it still won't do well even if it's inexpensive," she says.

One thing is certain: The netbook category is worth watching because it is growing and evolving on the fly. What is defined as a netbook today may be completely different in a couple of years, say experts at Wharton. Asks Clemons: "Are these devices stripped down computers or phones on steroids?"