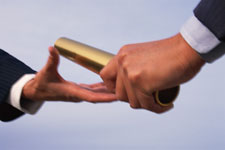 Ray Ozzie is in. Bill Gates is heading out (but not entirely). And Steve Ballmer is staying right where he is (at least for now). What does this game of musical chairs among the members of Microsoft’s high command portend for the world’s biggest software company?

Far from being a source of confusion and uncertainty, Gates’ recently announced decision that he will relinquish his full-time, day-to-day involvement in the company in July 2008 may be just the breath of fresh air needed for a firm facing major challenges to its core business, according to Wharton experts. Gates, in choosing Ozzie to replace him as chief software architect in 2008, has made a brilliant choice, they say. And while Ozzie and Ballmer bring different histories to their roles — Ozzie is a relative newcomer to Microsoft, while Ballmer is a longtime friend of Bill’s and a Microsoft veteran — there is every reason for them to do all they can to work well together. If management problems do arise, Gates, who will remain chairman after 2008, will be available to help sort things out. Indeed, one faculty member says Gates and Ballmer may be grooming Ozzie to eventually take over Ballmer’s CEO position when Ballmer decides to step down.

Gates, who has been the face of Microsoft for the last three decades, decided to ratchet back his involvement in the company to devote more time to giving away his $30 billion fortune to fund AIDS research and other causes through the Bill and Melinda Gates Foundation. Gates’ intentions took on added significance earlier this week when Warren Buffett, another close friend of Gates’, announced that he was donating $31 billion of his fortune to the Gates Foundation. The foundation will now have close to $61 billion to dispense, a far greater amount than that of the Ford Foundation and several other top charitable institutions combined.

At the same time that Ozzie was named as Gates’ understudy for the next two years, there was another significant move at Microsoft — the promotion of Craig Mundie from chief technical officer to the post of chief research and strategy officer. All eyes, however, will be on Ballmer and Ozzie, whose teaming up comes at a critical time for Microsoft.

“Ray Ozzie is a great choice,” says Kevin Werbach, Wharton legal studies and business ethics professor, who has known Ozzie since the late 1990s. “Ray is widely recognized as being perhaps the most brilliant software engineer in the world, and on top of that, he is … a wonderful and very engaging person. Ray is one of the few people who has the technological reputation to come into a place like Microsoft from the outside and garner respect.”

In contrast to Ozzie’s software expertise, Ballmer — who took over the chief executive role from Gates six years ago when Gates assumed the title of chief software architect — is known more for his sales and marketing prowess. Werbach describes Ozzie as “genteel of manner,” in contrast to the more outgoing and occasionally bombastic Ballmer, “but you don’t have the kind of success [Ozzie’s] had without having an iron will behind it.”

Steve Ballmer is “an extremely smart guy,” Werbach adds. “I wouldn’t challenge his technology knowledge at all. But he is a salesman and a manager more than an engineer, whereas Bill Gates was always seen as the technological inspiration for the company. Although Ozzie’s personality is very different from Gates’, he’s also someone who is a technical visionary.” Ozzie is best known as the developer of Lotus Notes and founder of Groove Networks. Lotus was acquired by IBM in 1995 and Groove was acquired by Microsoft in 2005, which is when Ozzie joined the company.

“These three have known each other for 30 years,” Werbach adds. “I haven’t asked Ray this point blank, but I suspect that part of the reason why Microsoft brought him in, and why he was willing to go, was the possibility that he would be the next CEO of the company. Gates’ [decision to] step back and elevate Ozzie and Craig Mundie reinforces that view for me…. This was a big decision for Ozzie. He didn’t have to do this. This was also a big decision for Gates and Ballmer. Microsoft is a great company with a very deep bench of managers. It’s not at all a trivial thing to bring in Ray from the outside for this visible role.”

Evan Wittenberg, director of the Wharton Graduate Leadership Program, sees Gates’ decision as part of an ongoing process of succession planning and says the Microsoft founder did the right thing in announcing a transition period. It allows for change without unsettling financial markets and provides continuity within the company.

“Six years ago, Gates stepped down as CEO, so that was the first step,” Wittenberg says. “Now he’s moving on to another role. He’s still going to provide the philosophical underpinnings of the organization and its history, and he’s going to provide consistency. And he says he’s not retiring. Two years gives the organization plenty of time to reshuffle to look for other leaders from within.”

Wharton management professor Katherine Klein says the transition period, even though unusually long, makes sense. “The transition is likely to keep Microsoft on a steady track, even though it is going through a lot of change. There’s something somewhat conservative in scheduling a two-year transition, but I think that’s wise.”

Wharton management professor Lawrence Hrebiniak agrees that Gates has done the smart thing in establishing a transition period to give Ozzie a chance to get his sea legs. In addition, by handpicking Ozzie for this role — Gates touching Ozzie on the shoulder with a sword is the image Hrebiniak suggests — Gates ensures that Microsoft employees will accept him.

Hrebiniak also says, however, that Gates, Ozzie and Ballmer will have to work hard to carry out Gates’ pledge to step gradually out of the way in deference to Ozzie’s new position. “The next year or two will be a period of testing,” Hrebiniak points out. “A two-year transition is a long transition. Gates is trying to say, on the one hand, ‘I’m leaving,’ but on the other hand, ‘I’m going to hang around to make sure you do things my way.’ If Ozzie does something Gates doesn’t like, will Gates jump in and say, ‘That’s not what I want'”?

Wittenberg agrees that Gates has to tread carefully to avoid undermining Ozzie, perhaps by overruling his decisions, but says this is unlikely to happen since Gates appears truly dedicated to spending more time than he ever has on philanthropy. “It could be a problem if Microsoft starts to do something that wouldn’t have been Gates’ choice,” Wittenberg notes. “If Gates starts questioning decisions and he has the urge to come back and reassert himself as the largest shareholder, that could be pretty disruptive. I don’t know to what extent he is a micromanager. His challenge is going to be how to play a role in the company that was his life and make sure he’s just putting his toe in the water. Pride in what he built may try to suck him back in.”

Kendall Whitehouse, Wharton’s senior director of information technology, says it will be interesting to see how the Ballmer-Ozzie relationship plays out because they are very different kinds of executives. “Politically, it’s hard to imagine Ozzie having the same weight Gates had [within the company],” notes Whitehouse. “Ballmer is not seen as a technological visionary. He runs the company and runs it well. My suspicion is Ballmer will focus on delivering near-term shareholder value and be more concerned with tactics, while Ozzie will be teed up to look at long-term strategy. These roles often naturally conflict. How are [Ballmer and Ozzie] going to make the tradeoffs between short-term tactics and long-term strategy? Where will the power lie? It will be interesting to see how much political power Ozzie will have to get his initiatives implemented across the company.”

Hrebiniak says Ozzie’s success will hinge on how well he can build on his technology background without stepping on Ballmer’s toes. “If I were him, I’d use Gates as a resource,” Hrebiniak says. “I would tell Gates what I’d like to do, then go to Ballmer. Ozzie should use Gates indirectly to influence Ballmer since they [Ballmer and Gates] are friends.”

Hrebiniak also believes a key issue will be how Ballmer and Ozzie settle differences over strategic decisions. “If Microsoft is entering a new business or product line, who should have the final say, or the biggest say: Ozzie and the software guys or Ballmer and the business managers? It’s not only a technical decision, but a business decision. You would think their roles and decisions would be clearly defined, but I’ve seen many cases in companies where they weren’t.”

Still, Hrebiniak notes that the changes at the top of Microsoft could be much-needed because sometimes a shakeup forces executives to sharpen their views of the company’s strategy and their own individual roles. “There could be a positive outcome from this,” he says.

Although Ballmer and Ozzie appear to have quite different personalities, Klein says it is not clear at all, according to the management literature, that personality fit is predictive of whether managers can work well together. “Extroverts often work with introverts. A lot of married couples have different personalities — and that’s not a bad analogy to what’s happening at Microsoft. To work together, you need a clear fit around values and goals. My impression is that there is such clarity about what’s needed at Microsoft. The company is incredibly strong but it is in challenging times and needs to be rethinking some of its strategies. That clarity is likely to serve Ballmer and Ozzie well and prevent too much jockeying for power.”

The key challenge for Microsoft is to adapt and thrive in a new world where the competition is coming from the likes of Google, not from the software competitors that Gates had to contend with in the 1980s and 1990s.

“The great challenge for Microsoft is that, at its core, it’s a software company — and software as we know it is dead,” says Werbach. “All the energy and economic activity is moving to the web. People more and more buy computers to [take advantage] of the web. They are going to question why they should spend hundreds of dollars on an operating system. And once they have bought it, they are going to question why they should bother to upgrade it. That’s the challenge for Ray Ozzie. This isn’t anything Microsoft hasn’t anticipated. The fact that it is willing to bring in Ray is an extraordinary admission on the part of Gates and Ballmer that they needed to do something.”

Longer term, Werbach says he would not be shocked if Ballmer steps down as chief executive when Gates gives up his post as chief software architect in 2008. “Steve Ballmer is a billionaire many times over. At some point, he’s going to want to move on in his life. Ray is not a spring chicken either.[Gates, Ballmer and Ozzie are all 50 years old.] If he’s going to be CEO, it’s going to happen in the next three to five years.” As for Gates, Werbach concludes, “the company is his life and he’s never going to stop being a significant influence on it.”

Home > Latest > Articles > Computers > Software > How Will Microsoft’s Changing of the Guard Play Out?