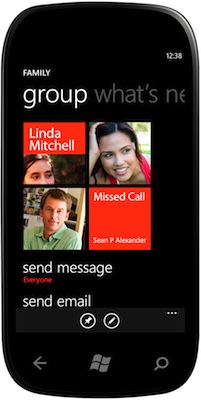 Microsoft today previewed the next major release of Windows Phone, code-named Mango that will deliver more than 500 new features. The "Mango" release will be available for free to Windows Phone 7 customers and is scheduled to ship on new phones beginning this fall. Windows Phone will also add support for additional languages, expand access to apps by launching Windows Phone Marketplace in new countries, and partner with new OEMs to enable expansion to new markets.*

"Seven months ago we started our mission to make smartphones smarter and easier for people to do more," said Andy Lees, president of the Mobile Communications Business at Microsoft. "With 'Mango,' Windows Phone takes a major step forward in redefining how people communicate and use apps and the Internet, giving you better results with less effort."

Communications: Easier to Connect and Share
The "Mango" release organizes information around the person or group people want to interact with, not the app they have to use.

A Smarter Approach to Apps
Windows Phone will challenge the way people think about apps. Today their usefulness is measured by what can be done within the app, but Microsoft sees the promise of apps in how they can be integrated directly into the core experiences of the phone. In addition to making it easy to get timely notifications and updates from apps right from the Start Screen, the "Mango" release also will surface apps as part of search results and within Windows Phone Hubs. As a result, a useful app is more likely to be right there when needed.

Taking the Internet Beyond the Browser
In addition to including Internet Explorer, the "Mango" release will connect the power of the Web to the unique capabilities of Windows Phones, such as location awareness, camera and access to apps, to present a way of viewing the Web that is more localized, actionable and relevant.