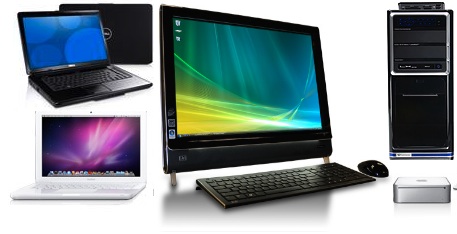 PC or Mac buying tips for any shopper

Desktop or Laptop?
Unless you know why you need a desktop computer (production, business, design, web stuff, etc.) you should probably purchase a laptop. They are portable, wireless (if you purchase one with WiFi built in), and generally powerful enough to do most of the things you tend to do with a computer. They are also relatively cheap. In fact, the main reason for this article is that computers are so inexpensive right now, many people find themselves only shopping price.

It's important to save money, but it's also important to make sure that the computer you buy is going to be properly suited for the things you want to do. If you're the kind of computer shopper who is comfortable purchasing your hardware from Walmart or Best Buy (as opposed to a computer specialty store), these tips are specifically for you.

Mac or PC?
If you're shopping a big box store, the "Mac or PC?" question probably does not apply. The words "inexpensive" and "Mac" cannot be used in the same sentence. However, the words "cost effective" very accurately describe a Mac. If you like getting things done with your tools as opposed to fighting with them, buy a Mac. (For your information, I am Bi-digital! I use both Mac's and PC's everyday.) If you are an experienced PC user and you just want a new computer or, if you are a slave to a PC-based business or you are looking to get the least expensive computer you can get, then you're a PC.

Notebook or Netbook?
Netbooks are super-small notebooks. They don't have many features so they are pretty cheap. Many are under $350. Just say no! If you need a computer, buy a notebook. If you want a netbook as a second or third computer to throw in a briefcase or purse, knock yourself out. Doing anything substantial on a netbook is torture.

Back to our story … if you mostly need a computer to browse the Internet, do email, some word processing, a few spreadsheets and a PowerPoint or two, than almost any computer will do. When you hit your big box retailer, just grab something that appeals to you with Windows 7 installed.

If you want to do yourself a favor, ask the tech guys at the store to take 100% of the preinstalled third-party anti-virus software off of the computer before you take it home. Geek Squad offers the service for a few bucks and, if you're not a tech, it is really worth it. Removing all of the annoying demos and pre-installed junk you don't need can, in some cases, make your new computer work 25-50 percent faster.

Specifications to know
Now, even if you are just buying the computer for light home or business use, there are some specifications you will want to pay attention to.

The first is the processor. One of the easiest ways for a manufacturer to lower the price of a computer is to underpower it. It's sort of like putting a lawnmower engine in a passenger car. If you are buying a laptop as your primary computer, you will want the most powerful CPU (Central Processing Unit) you can afford. However, do not spend extra money for a fractionally more powerful CPU, it's usually not worth it. For example: you might find two identical computers, one featuring a 2.8GHz Intel Core 2 Duo CPU and the other featuring a 3.06GHz Intel Core 2 Duo CPU for an additional $300. Don't spend the extra money for the faster processor unless you personally know why you need the extra processor speed. CPU speed alone does not make a computer run faster. What you, as an average computer user, will perceive as a fast computer, requires a combination of features including: a fast hard drive, ample RAM (Random Access Memory), WiFi and video card.

Make sure the computer you are buying has at least 2GB of RAM per processor. An Intel Core Duo 2 has two processors, that means you want at least 4GB of RAM. (There is a technical reason to have more RAM that is outside the scope of this writing. For most users this rule of thumb will suffice.)

Since your goal is the most powerful, fastest computer you can get for your money, make sure the computer comes with a 7200 rpm (or faster) hard drive. No matter how fast the processor is, if it's waiting to get data off the hard drive, you'll think your computer is slow. Can you live with a 5400 rpm drive? Yes, but you'll be happier with the faster one. Like I said, we need to balance a combination of features to achieve the best deal. Seriously, don't buy a computer with a hard drive slower than 5400 rpm, it will make you very unhappy.

If the computer has WiFi built in, make sure it is specified as 802.11n compatible. Less expensive computers usually feature slower 802.11b or 802.11g WiFi interfaces. A "g" compatible interface is OK, try to stay away from "b-only" compatible computers. It's old, slower technology. Personally, I would not consider buying a laptop without WiFi built in. You may think it does not matter … it doesn't except for the time you really need to connect and you can't find your external WiFi card.

Lastly, try to get the fastest video card for the money. The faster the video card is and the more memory it has, the faster your screen will write and the faster you'll think your computer is working. This is especially important if you do heavy Internet browsing, like to watch video on your computer or play a game now and again. With many laptops, the video card is integrated — this is not a problem, just ask the salesperson to let you compare two different computers: one with a faster video package and one that is less expensive and slower. Open a browser on both and go to your favorite rich media website and poke around. You will easily determine which video card/computer package suits you best.

If you balance these features, you may spend a little more, but you'll get the most for your money.