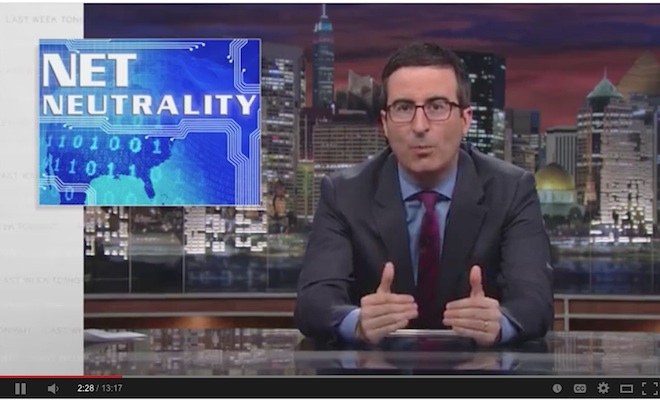 On his show Last Week Tonight on HBO, John Oliver offers a comedic explanation about net neutrality in a 13 minute video clip. If you don’t know what net neutrality is or what it means to you, then this video is for you. Cable companies are trying to create an unequal playing field for internet speeds, but they’re doing it so boringly that most news outlets aren’t covering it.

John Oliver explains the controversy and lets viewers know how they can voice their displeasure to the FCC. Anyone can tell the government how they feel about net neutrality by commenting at fcc.gov/comments, “Protecting and Promoting the Open Internet” (proceeding 14-28). Currently over 45,000 people have commented, in large part due to this video which already has over 1.5 millions views on YouTube.

If you still have an appetite for more videos, these two short videos from Bloomberg West’s Editor-at-large Cory Johnson are also worth watching. John Oliver references a clip from the first one in his monologue.