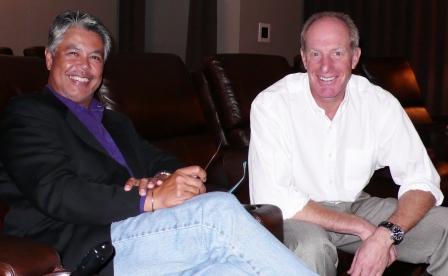 DW Collection is a luxury high performance audio and entertainment equipment manufacturer dedicated to bringing consumers the very finest in home audio and convenience. DW Collection has already incorporated Aphex technology into several of its products, including the Art.Studio tri-amplified speaker system and the Art.Station iPod dock and the Art.Suono and Art.Solista wireless music transmission systems. Other DW Collection products include the exclusive FERRARI-licensed Art.Engine and Art.Opera speaker systems.

"From our Aphex motto of 'Making Your World Sound Better' to DW Collection's motto of 'Respect The Music,' it's pretty clear our companies have complimentary goals," DWV Entertainment's President and CEO David Wiener says. "Professional users are already familiar with Aphex technologies and swear by them. Consumers and serious music lovers have come to appreciate the hand-assembled quality and outstanding engineering of DW Collection products. Once consumers experience the incredible impact that Aphex technology has on sound, they are amazed that they ever listened to their music without it. Given this consistent reaction, we plan to expand our Aphex offerings with products and licensable technologies. At the same time, we'll bring our culture of creativity and innovation to Aphex and create even more excitement and customer awareness."

Robin Sibucao, DWV Entertainment COO, adds, "The pursuit of delivering better sound is alive and thriving at Aphex. We intend to unleash an amazing awareness campaign and reach out to every music lover worldwide."

Aphex engineers originally developed their audio enhancement technology for the professional recording industry. Constant innovation and technology development has allowed early adopters like James Taylor, Paul McCartney and Fleetwood Mac–as well today's leading artists and sound engineers–to improve the fidelity of both multi-track recordings and concerts. Unlike equalizers and conventional "enhancement" circuits, Aphex improves the audio signal with dynamic analysis and impact by analyzing and restoring musical harmonics in real time and providing a remarkable sense of spaciousness and clarity. Some engineers even call the effect "magical." The circuit is switchable, so those listening to uncompressed or high fidelity tracks can turn it off if they wish. "We find, however, that once they hear it, users are not inclined to switch it off," Wiener quips.

Wiener and Sibucao plan to create a third company under the DWV Entertainment umbrella, as yet unnamed, to bring the combined engineering and aural excellence and expertise to more value-priced electronic products.

Integrating Aphex into DWV Entertainment comes at an auspicious–some say critical–time in the recording and playback industry for both consumers and professionals. The creeping compression and loss of dynamic range of music–basically squeezing the golf-ball size signal through an electronic equivalent of a garden hose–has made music sound flat, unnecessarily loud, annoying and quite simply exhausting. It's called listening fatigue. "There is simply no other enhancement technology as powerful as Aphex and just as importantly, it's a time proven technology we're bringing to the consumer audio world for the first time. With our licensed technology going into guitars and other instruments, the music cycle is now complete: From the artists' instruments, to the recording process, to live and DJ performances, and now your home! That's where we want to see our Aphex technology and products: everywhere," concludes Wiener.

Founded to create advanced vehicles, products, furniture and fashion, DWV prides itself on a unique operational model, based on experience with Formula One teams, that inspires its staff to optimize performance, style, operations, image and success.

DWV has worked with many of the world's great brands, including Ferrari; the U.S. Ski Team; Columbia Sportswear; Cannondale; Ben & Jerry's; Nike; 2009 IndyCar Series Champion Target Chip Ganassi Racing; racing supplier TWR; Old Navy; Bloomingdales; and many others. DWV programs have also been sponsored by such highly regarded companies as Adidas; Campagnolo; AMF; DuPont; Fischer; Salomon; Revo; and Vuarnet. In addition, DWV's work has been featured in major media worldwide, as well as on a PBS-TV documentary.

About Aphex
Aphex is a wholly-owned subsidiary of DWV Entertainment. Based in California, Aphex produces a wide variety of audio signal processing and transmission products for professional use in recording, live performance, commercial and broadcast applications. 35 years of engineering advances and patented technologies allow Aphex to improve the quality of sound — both music and voice — at every point in the production process.