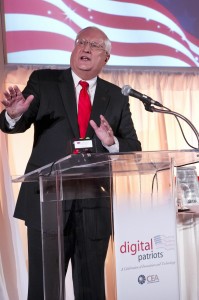 If we all got what we wanted, TV would be commercial free, our favorite shows would be available whenever we wanted them and we could watch TV wherever we go. Americans have gone mobile, and it’s time for TV to catch up.

The Digital Video Recorder was supposed to slaughter TV commercials, according to conventional wisdom, yet Nielsen is saying that annual TV ad spending is closing in on the $80 million mark while the DVR could reach the tipping point of being in half of American TV homes by the fall (growing nearly 10% over the past year.)

Meantime, the Consumer Electronics Association is reporting that household penetration of tablets is up 17 percent over last year.  Smartphones have grown by 12 percent, and e-readers by 10 percent. Despite rough economic seas, consumers want the latest gadgets that help them go mobile.

98 percent of households own the ubiquitous TV set – and one that is likely flat and high-definition offering stunning pictures.

TV When and Where You Want It

“Linear” TV programming, served up to viewers on schedules developed by broadcasters, started in with the introduction of the first TV broadcasts to well-heeled buyers who could afford an RCA TV in New York City 74 years ago.  Promotional films produced by RCA showed tuxedoed viewers peering into their console 12-inch black-and-white TV screens, luxuries that would set one back nearly $10,000 in today’s money.

The very first baseball game on TV was broadcast in mid-May of 1939, featuring college teams from Princeton and Columbia Universities. The first major league baseball game wasn’t broadcast until later that summer, and the first NFL contest wasn’t seen on TV screens until later that fall. Cartoons on TV are nothing new, in fact the first animated feature to be broadcast was also in television’s first year when “Donald’s Cousin Gus” was carried by the station that became WNBC in New York.

Compatible color TV signals first painted the screen in vivid hues in early 1954, with the three major networks taking more than ten YEARS to fully make the transition to colorcasting. But since the 1960’s, innovation has pushed TV much faster.  And the control has shifted from the “control room” of the broadcast TV station to the consumer’s own “remote control” in his hand.

The Videocassette Recorder (and its competing Beta and VHS formats) arrived in the mid-1970’s, an innovation brought to American viewers by foreign companies that were derided for sapping control from the TV networks and movie studios. But despite lawsuits that tried to stop the ability for consumers to tape whatever they wanted and watch shows later, the U.S. Supreme Court upheld the consumer’s right to timeshift broadcast TV shows nearly 30 years ago. That landmark 1984 decision is still a linchpin in the innovative successes of the consumer electronics industry, and comes up frequently in discussions about two new innovations that now “threaten” or “free” TV broadcasting (depending on your point of view.)

In 1999, a computer-based recording system called the Digital Video Recorder (DVR) showed what was possible:  a device that could detect commercial breaks and just skip over them with the push of a button.  Fast-forwarding could literally be done with a couple of button pushes.

Two vastly different companies are now delivering what consumers prefer, much to the consternation of TV broadcasters – who sometimes come off as Paleolithic in their rejection of new technology. DISH is offering a DVR platform that focuses on mobility and choice. And a startup called Aereo is repurposing over-the-air TV signals for the web in New York and will soon expand to Boston (and has other cities on its radar.)

First up, our client DISH – the satellite TV company with some 14 million customers (which makes it one of the largest content distributors on Planet Earth.) DISH’s latest Digital Video Recorder is the Hopper with Sling, an award-winning DVR that puts control squarely in the hands of the DISH subscriber. If desired, the device can be set to not only record every Prime Time network show but also skip over commercials on a program-by-program basis at the viewer’s request (but only the day after the show has been recorded.)

Despite the fact that virtually every viewer is already skipping over commercials – and has been since broadcast TV taping started in the 1970’s – the TV networks (and their advertisers) are both breathless and aghast in their criticism of the feature that DISH calls “AutoHop.”

The Hopper’s “Sling” capability means that you can watch your DVR from anywhere in the world if you have an Internet connection.  And the Hopper can also transfer favorite shows to an iPad for offline viewing (from an airplane, as an example.)

DISH President and CEO Joe Clayton (pictured top) put it best at an event in Washington, D.C. last week, as he was recognized as a “Digital Patriot” by the Consumer Electronics Association. His message echoed loudly in industry trade publications like Multichannel News.

“Over the years, I’ve adopted a radical business strategy that has often been challenged by many incumbent corporations: give the consumer what he or she wants. That’s a winning formula for success that implies embracing change, embracing technology, and most importantly embracing the consumer,” said Clayton.

“So why would incumbent broadcasting, cable, and content companies oppose rather than embrace innovation?  Why have they forsaken improvements to the consumer experience? Why have they given up on future profit opportunities?  It’s because innovation upsets the status quo and is very difficult. There is a tremendous amount of innovation, risk, and worry that comes from actually having to deliver better products. It’s really hard work! It’s much easier to call the other guy’s stuff ‘illegal’ and then knock off early.

“Broadcasters would have you believe that it’s illegal to skip TV commercials. But that’s something we’ve all done since the introduction of the remote control. If it’s illegal, then we’re just a nation of outlaws,” Clayton said.  “Seriously, we think advertising can be better targeted to the viewer. So DISH isn’t just about giving people the ability to hop over commercials. We’re designing different ways to reach viewers with messages they might actually care about.”

But are broadcasters really moving like dinosaurs? Some have made investments in new Mobile TV technology that does allow live channels to go along with consumers wherever they go — inside tablets and phones.

CBS is making a minority investment in Syncbak, a technology company that lets viewers pick up local TV stations via the Internet (with a subscription.)

That investment comes on the heels of legal actions that the networks are taking against Aereo, which has a similar idea: pick up free “over the air” TV stations with special antenna arrays and then pump those signals over the Internet to tablets, smartphones, and computers. And charge viewers for the privilege, without yet sharing revenue with the providers of that content. This last point makes the networks cringe, of course.

The battle royale has some predictable actors and swordsmen, including Consumer Electronics Association President Gary Shapiro, who is challenging TV broadcasters to do more with innovation.

“I can give many instances where the broadcasters tried to or actually thwarted or stalled technological innovation. They push mandates, like an FM chip in cell phones, or tuners in TVs, or must carry on cable, or banning of devices, or new payments on others and no payments by them to copyright owners. Their message is clear: as long as existing broadcasters have their piece of the pie, there’s no need to care about everyone else. To which I respond: innovate or die,” Shapiro said this week.

DISH and Aereo are pointing the way with disruptive, innovative technologies that garner lots of attention and lawsuits and give consumers, viewers (and voters) new options for entertainment. How the content industry responds to these opportunities (or threats) could affect how we all see the future.