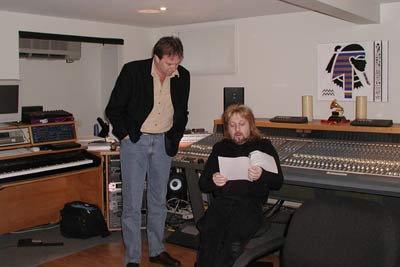 Aldo Nova (seated) and Ian Colquhoun in Aldo’s recording studio. Aldo has the M2s, M3s and M22s in his studio. Axiom speakers were also the reference speakers at the world famous Le Studio, north of Montreal.In most enthusiasts’ homes, however, a “reference” loudspeaker is simply the speaker they purchase and are happiest with for an extended period — and that may include some old and flawed speakers. They become devoted to the sound they’ve heard for years and consider it their reference, even though that sound may be wildly colored and inaccurate (I won’t mention brand names so no feelings will be hurt).

However, once they hear truly linear and musically more accurate speakers like the Axiom M60ti’s, M22ti’s or M80ti’s, etc., it’s often a revelatory experience because they realize how much speaker design has progressed since the ’50s, ’60s and ’70s. They may be astonished at the degree of realism and sonic nuance provided by well-designed modern speakers and of how much detail and spatial information they were missing listening to their muddled old “reference” sound.

Of course a reference speaker must be one that naturally and convincingly reproduces the sounds of musical instruments and voices. If you already own Axioms, you already know what speaker attributes like “transparent,” “neutral” and “detailed” mean as they describe sound quality. You’ve likely spent hours and hours listening to your favorite recordings on those particular speakers and they have become your standard of fidelity, the benchmark against which you’d measure the sound of any new speaker. It’s the neutral quality of the speakers that let you sort out good from bad recordings, an ability that defines true reference sound quality. A great speaker is one that becomes a transparent window to the quality of the original source recording-good or bad. It shouldn’t add or subtract any timbral or tonal traits of its own to the playback sound. It should not function as a quasi tone control, covering up flaws in a recording. Nor should it artificially emphasize bass content, unless the recording itself has heavily mixed bass (plenty do).

Looking at the progress of speaker design over decades, it has been a gradual process of refinement towards a goal of transparency and neutrality, and this trend will undoubtedly continue. When the speaker stops getting “in the way of,” or impeding, the music, then it has attained true reference status.

Does a Reference Recording Exist?
The issue of “reference” becomes especially thorny when you refer to a particular disc or recording. Apart from advocating a few albums by some famous artists of wide general appeal (Norah Jones, Alison Krauss and Union Station, James Taylor and Diana Krall, to cite a few examples), I tend to be wary of suggesting specific CDs because there is such wide variance in musical taste. Those artists are fairly safe territory because they are unlikely to offend and the recordings are, by general consensus, well engineered. But what may be a “reference” for you just may not work for me.

During many years of double-blind speaker tests, various rock, pop, jazz, and classical recordings were tried out to see which material was more useful in spotting typical loudspeaker coloration and distortion. It turned out that the classical recordings were more reliable for quickly differentiating good from bad speakers, partly because a large orchestra with chorus covers such a wide range of musical frequencies and harmonics.

With a few exceptions, I don’t generally use rock music to test speakers, partly because I grew up mostly listening to classical, jazz and acoustic music and vocals. I have never accommodated the distorted electric guitar sound (I never understood the reverence for Jimmy Hendrix’s playing). But if you grow up listening to a lot of rock ‘n’ roll, you may know that sound really well and it may be useful for you to make accurate judgments of speaker sound quality. If you’ve played or listened to a Stratocaster, then I figure you likely know and appreciate when a good speaker accurately reproduces it.