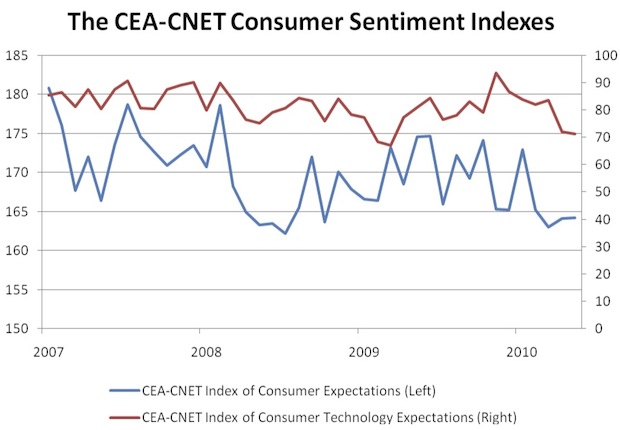 Consumer confidence in the overall economy remained relatively unchanged in May, while confidence in technology showed a slight drop, according to the latest data released today from the Consumer Electronics Association (CEA)® and CNET.

The CEA-CNET Index of Consumer Expectations (ICE) rose one-tenth of a point to 164.2 in May. The ICE, which measures consumer expectations about the broader economy, is down over ten points from this time last year.

"Consumers remain guarded after a tumultuous month on Wall Street," said Shawn DuBravac, CEA's chief economist and director of research. "Consumers are increasingly worried about their job security and long-term financial health with more people feeling the U.S. economy will be in worse shape in the coming twelve months."

Consumer confidence in technology showed a slight decrease this month. The CEA-CNET Index of Consumer Technology Expectations (ICTE) fell eight tenths of a point to 71.5. The ICTE, which measures consumer expectations about technology spending, reached its lowest level since its all-time low in March 2009. The ICTE is down nearly ten points from last year.

"With concerns about financial well-being, consumers are watching what they spend, including on technology," said DuBravac. "Despite a number of new and innovative products entering the marketplace, sentiment is suggesting consumers want to hold back purchases despite recent months of strong spending figures."

The CEA-CNET Indexes are comprised of the ICE and ICTE, both of which are updated on a monthly basis through consumer surveys. New data is released on the fourth Tuesday of each month. CEA and CNET have been tracking index data since January 2007.

Home > Latest > Articles > Consumer Confidence in Technology Down Slightly in May