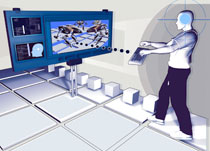 The cable television industry has unveiled an answer to the increasing threat from Internet video sites such as YouTube and Hulu. The plan: Make cable subscriptions portable to any Internet accessible device, such as a laptop computer or even a mobile phone, for no additional charge. Experts at Wharton say the move is a promising early step in meeting the Internet video challenge, but they expect more such experimentation ahead.

Time Warner and Comcast, the nation's largest cable television providers, announced in June that they will launch a service, called TV Everywhere, starting with limited trials this month. It will allow the companies' cable subscribers to use their computers to watch on-demand programs from the likes of Time Warner's TNT and TBS networks. The service will be available for no additional fee to those subscribers. Since the announcement, CBS, HBO, Cinemax and Starz have announced their intent to participate.

"It's a sensible defensive move and it's not the last by any means," says Gerald Faulhaber, a business and public policy professor at Wharton. "The cable guys are very aware of the threat of [Internet TV]," which "is very disruptive and attacks the model of cable television."

Americans viewed 16.8 billion videos online in April, according to comScore. More than 40% of those views occurred on Google's YouTube, which dominates the market. None of the other online video sources drew a share of more than 3.1%. Bernstein Research, in a March consumer survey, found that 35% of respondents would consider cutting a cable subscription in favor of online video in the next five years. Cost and more content choices were the two top reasons for that decision.

According to Time Warner and Comcast, TV Everywhere adheres to a few basic principles: Make content easily accessible on the web, and make its use easy to measure. The effort will start this month with a 5,000 subscriber trial by Comcast. On a conference call, Time Warner CEO Jeffrey Bewkes said he expects other content providers and distributors to follow the TV Everywhere model. If it is widely adopted, he said, TV Everywhere could be the "biggest story in Internet video" and more successful than YouTube and Hulu. Comcast CEO Brian Roberts stated on a conference call that the TV Everywhere plan was "the next logical evolution of cable." He added: "Our view is to offer consumers whatever they might want on whatever device they want and when they want it."

The reaction was swift. Activist groups such as Public Knowledge and the Media Access Project panned TV Everywhere as a way to preserve an entrenched cable business model that limits consumer choices. Experts at Wharton, however, questioned those concerns. "I don't understand the backlash," says Peter S. Fader, a marketing professor at Wharton. "It's a wonderful idea and, if [the cable industry] gets it right, it will be huge. However, the chances of cable getting it right and becoming dominant are slim. There are so many interesting possibilities — the chances for any one firm to come out and dominate are negligible."

Already, there are multiple players and business models in the Internet video market. Hulu is an advertising supported service offering professionally produced content. YouTube, whose subscribers upload 20 hours of video every minute, features all that amateur video as well as some professionally produced content (some of which is licensed from content owners and some of which is posted by users without regard to copyright). Hosting so much video, however, is expensive and has limited YouTube's profit potential. Meanwhile, content providers such as NBC, Disney and Viacom are making their own shows available on their branded sites. And then there are subscription-based services such as Netflix, which delivers video online in addition to DVDs through the mail. Finally, a device called Slingbox allows consumers to watch their home television via their computers and mobile gadgets that can connect to the Internet.

These approaches to online television are likely to vie for supremacy for years to come. Time Warner's Bewkes acknowledged in a conference call with analysts and journalists that there are technical and economic details to be sorted out as TV Everywhere launches. In addition, it's unclear how licensing rights will emerge as the bridge between cable and online video is built. Comcast and Time Warner say they need to create a consumer friendly way to access cable subscriptions securely on the Internet.

Meanwhile, according to experts at Wharton, the only certainty about online video is that just about everything will be tried. "Technically it's becoming easier to deliver video anyway you want to and that's an opportunity for many companies," according to Kendall Whitehouse, senior director of IT at Wharton. "But online video remains a challenge because the monetization models are still emerging."

Andrea M. Matwyshyn, a legal studies and business ethics professor at Wharton, agrees. "There's not one model or platform that's going to clearly win. Increasingly there will be individual viewing styles. Some consumers will stick to cable. Others don't like watching TV on laptops. Others don't want TV and will pick shows a la carte. Viewing habits will be consumer specific."

Playing Defense?
Cable companies had to do something to make an Internet television play, according to Faulhaber. Although there have been press reports about consumers dropping cable subscriptions because they believe they can get the programming they want on Hulu and other online services, the number of people actually cutting the cord is small, he adds. That means that the cable industry has time to enter the fray. "These moves absolutely have to happen. I'm shocked that … cable companies, which are the most conservative, have taken such an innovative step."

Faulhaber, along with Matwyshyn, Whitehouse and Fader, say the Time Warner-Comcast effort is designed to protect and extend a profitable business model. "It is a defensive move," says Matwyshyn. "The popularity of Hulu and the Slingbox is allowing consumers to get used to 'spaceshifting' their content. Once consumers are used to the idea of getting their content on multiple devices, they will want to access their TV that way, too."

Bewkes chafed when asked by reporters and bloggers whether the Time Warner-Comcast venture was a defensive move. "This is offense with more choice, more immediacy and no extra charge," said Bewkes. "We're fortunately in a position where this doesn't cost us much money. We have an advantage and we're going to use that advantage."

Faulhaber agrees that TV Everywhere represents more of an offensive play. "The notion of giving customers more choice is a good idea, and extending on-demand viewing is one way to combat Internet TV," he says. "What cable needs to do is offer all the functionality of the Hulus out there and other streaming video to paying customers. If the industry does all of that, all Hulu has [to offer is that it's] free. And you can fight free. Bottled water does it. iTunes does it. You just have to get there early."

While experts at Wharton agree that TV Everywhere can be successful, multiple economic questions remain unanswered. Will cable companies like Cablevision and Comcast continue to pay content providers such as ESPN and CNN? Or, with its existing subscription revenue model and a foothold on the web, could cable gain enough clout to reverse the longstanding tradition of cable firms paying for content? Or, will the content providers simply bypass cable and satellite distributors and offer their movies and television programs directly to viewers via the web?

Fader says it's far too early for such questions to be answered. "These companies have a real incentive to innovate with their business model. There will be a la cartead and subscription models. There will be 'freemium' [free, ad supported services with a subscription option]. The cable companies will find that different models will work well for different types of content."

Some experts at Wharton say that the power of aggregators to distribute content means companies like Comcast or Dish Network might ultimately command fees for carriage. If that were to happen, it would invert the current model, in which cable and satellite providers pay content creators fees for the right to show their movies and TV programs. Faulhaber says that TV Everywhere has the opportunity to alter the existing model. If cable providers become the dominant distribution point for content companies on TV and online, they would hold more negotiating power. Faulhaber suspects that content aggregators will garner more power since these firms can bring a bigger audience.

"Distribution and aggregation are important, and being part of Comcast and a Cablevision package matters," says Faulhaber. "That will matter online as well."

Details about the financial aspects of the Time Warner-Comcast TV Everywhere pilot are sparse. Whitehouse expects the economics of TV Everywhere — like all online video business models — to be fluid. The business case for HBO, which can just extend its subscription-based offerings online, may be different than channels that rely on advertising and carriage fees from cable companies.

Wharton professors generally agree that content providers are in a weak position in the video chain because they lack the distribution channels to deliver their shows. Although some cable content providers have web sites that get significant traffic, it is unlikely they can ignore the cable industry's subscriber base. Indeed, Matwyshyn and Whitehouse both say that economics may be the biggest reason cable companies will be online video players. Cable companies already have licensing arrangements with networks and content providers and a proven business model that is successful for all parties involved. "The challenge with online video is the monetization options. That's why it makes sense for cable television to be a player in this space. They bring a monetization model," says Whitehouse.

Enjoy the Show
The Internet video market is entering an exciting period in which multiple players are willing to experiment with new business models, say experts at Wharton. TV Everywhere, although backed by Time Warner and Comcast, is just one option. Netflix, Google, content providers and a bevy of known and unknown startups could become kingmakers in video. However, the television industry's existing players aren't going to miss their shot.

"As the well-known story goes, the growth of the railroads stalled because they believed they were in the railroad business instead of the transportation business," says Whitehouse. "If the cable companies think of themselves as merely in the cable TV business, their economic model will be difficult to sustain. If they realize they are in the much broader business of content delivery and monetization, it will give them more growth over time."