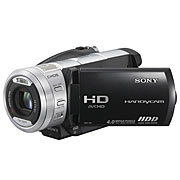 There are actually only five handheld HD Camcorders that you can consider purchasing right now, four from Sony (HDR-SR1 (pictured), HDR-UX1, HDR-HC3, HDR-HC1), one from Canon (HV10). There are plenty of relatively low cost semi-professional or "prosumer" models above these, but I'm going to assume that you are not interested in a shoulder-mounted camera suitable for ENG work as your personal camcorder. As a practical reality, you have three format choices. Choosing a format is the most important decision you will make. Everything else about the camera is secondary.

Do you want to record to tape, DVD or Hard Drive? If you don't know, the answer for today is tape. This is not because I like tape; actually, I hate it. It is because if you are planning to do any editing at all, the easiest and most compatible format is HDV on MiniDV tapes. You simply take your camera, plug it into your computer, ingest your video into Final Cut Studio (Mac), iMovie (Mac), Video Vegas (PC), AVID Express (PC/Mac) or Adobe Premiere (PC/Mac) and make your movie. Nothing could be simpler. It's one cable (Firewire) and you're done. So, if you want to edit your HD home movies on your computer with commonly available, consumer-friendly software, Sony's HDR-HC3, the discontinued Sony HDR-HC1 or Canon's HV10 are your only choices. (Important Note: The new Sony and the Canon don't have microphone input jacks. This may never matter to you, but if you ever want to shoot an interview or use the camera to do a video blog or vlog, you will be very, very unhappy.)

As it turns out, the discontinued Sony HDR-HC1 does have both a headphone and a microphone jack so, believe it or not, the discontinued model (which can still be found in stock everywhere) is more desirable than the current models. How Sony and Canon could sell a camcorder without a provision for an external microphone is beyond me, but you probably would not think to ask about it. The other two formats of HD camcorders are available from Sony. They are the HDR-SR1 which records HD to an internal 30 GB Hard Drive and the HDR-UX1 which records to a small Blue Ray DVD. Just say no!

I truly can't wait for these two cameras to be ready for prime time. The fantasy of simply transferring a couple of hours of video from a hard drive in my camera to the hard drive on my computer is wonderful. But the reality is not. Sony's new camera also comes with a new HD format and you need to use their software (which is a sub-optimal experience) to transfer and edit your video. It's just too early to buy this camera. The other format is the HDR-UX1 which records directly to small format Blue Ray DVD discs. These are also incompatible with practically everything so it's too early to buy one of these also.

Now, if you really will never need to edit anything and if you will really never care about sharing the videos with anyone else, both of these cameras will work pretty well. You just have to be willing to playback your video from the camera or on a computer that is running the Sony software. Once again, I think it's too much to ask of consumers. It is important to remember that we are talking about HD camcorders here. Direct to DVD and Hard Disk SD (Standard Definition) camcorders are lots of fun and they are compatible with everything. 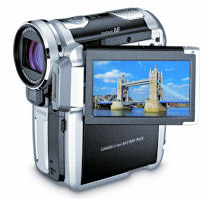 So, just to summarize, if you feel like you must have an HD camcorder for the holidays, my first choice is the discontinued Sony HDR-HC1. My second choice is the Canon HV10 (pictured) It's small and great for Grandma standing in front of the Empire State Building kind of shots). But remember, no external microphone jack, so no video blogging. I don't have a third choice. And, truth be told, I really don't like choices one or two that much. If you really want a great stocking stuffer this year, try the new iPod shuffle for $79, it won't help you make HD videos, but these cameras won't help you that much either.