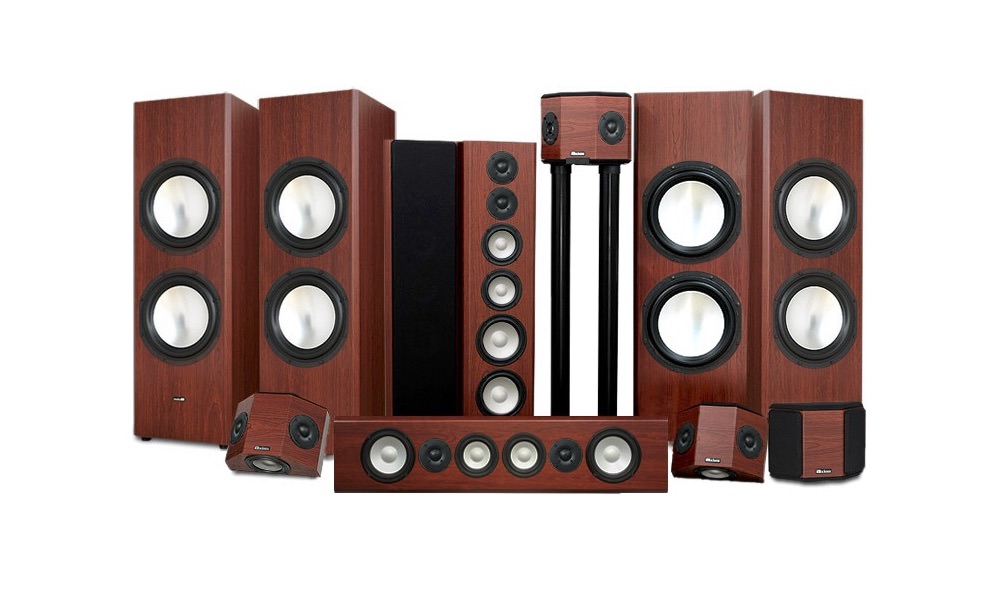 Amid the multi-channel world of Dolby Digital 7.1 and surround sound, we don’t often stop to question what is it we’re seeking? (For this discussion, let’s ignore the video aspect of home entertainment, for without the audio portion, there would be little or no enjoyment of most events, musical or otherwise.)

Are we looking for a “faithful re-creation” of a musical event by our home stereo or surround systems, as if we were hearing it in the very concert hall or club or studio where it was recorded? Or a plausible illusion of musicians in our living room? Most of us would agree we’re after a believable representation of a musical event, not a literal re-creation necessarily, with the appropriate directional and spatial cues and natural musical sounds that let us believe we might be hearing it live.

Fidelity
“High Fidelity” is an elusive term, because it raises the question of fidelity to what? In our quest for “hi-fi”, the term that emerged in the 1950s to describe radical improvements in sound recording and reproduction, most of us would agree that we want musical instruments and voices to be accurately represented — to sound close to what we’d hear in real life. Loudspeakers should reproduce a trumpet and a piano so they sound like they do played in a room or club, and a female or male vocal should have the natural quality of a human voice. The loudspeaker should encompass all the important harmonics, frequency range, and tonality of those instruments (the voice is an instrument) and not add its own tonal colorations to the mix. If all the links in the sound recording and home playback chain come together, then our ears and brain may be convinced that we just might be hearing a real piano, trumpet or vocalist across the room from our couch.

One microphone, one channel
Less than a century ago, analog technology limited a recording to one channel with one microphone. In fact, in the acoustical era of recording (before the advent of tube amplification and electrical recording in the mid-1920s), one huge horn into which a performer sang was connected to a diaphragm, whose vibrations moved a stylus that carved out analog groove undulations in a continuing spiral in a wax-coated zinc disc. (Playback in the home on Emile Berliner’s gramophone was the reverse process: The undulations in the record groove moved the stylus, which was mechanically connected to a diaphragm at the apex of a big horn). There was no such thing as a “mix.” During live recording, soloists or musicians stepped up close to the big horn to increase the recorded “volume” of the instrument relative to the rest of the band.

The entire recording and playback process was acoustical, obviously one channel, yet crowds in department stores marveled at the “lifelike re-creation” and power of the great American blues singer, Bessie Smith, the “empress of the blues,” or of the famous Italian tenor Enrico Caruso’s operatic voice, despite the fact that Caruso’s and Smith’s voices were almost obscured in a sea of surface noise, wobbly pitch and acoustical/mechanical distortions. Nevertheless it was a reproduction of a musical event, albeit primitive by today’s standards, but one that sold millions of 78-rpm discs to a public hungry for recordings of great artists, to be replayed endlessly in their homes.

Stereo Recording and Playback
The arrival of stereo (2-channel) recording in the late 1950s brought with it real spatial and directional cues that conveyed the breadth of a musical ensemble as well as some spatial aspects of a recording venue. Going to two channels seemed logical enough–all humans possess two ears–and the recording and disc-cutting advances in the early 1960s let us finally appreciate the physical arrangement of musicians in an orchestra or band across a soundstage between the two stereo speakers.

Problems still remained in completing the illusion, of course. While two channels realistically conveyed the width of a musical group and, if microphones were carefully placed, some sense of depth, the actual reverberant cues that we hear mainly from the sides of a hall or club in real life were thrown at us from the front by the stereo speakers. That lessened the illusion of being at an event in a concert hall or club. Additions of artificial reverberation through side speakers were tried with some success in the 1970s but the 3-dimensional illusion of being transported from a living room to a larger acoustic space was still largely missing from two-channel recordings.

Direct and Reflected Sounds
Acoustical research into how our brain and ears interpret the arrival times and strength of sounds coming directly at us from the front and the secondary reflections from the sides suggested that more than two recording and playback channels would be necessary to supply the missing reverberant side reflections that would complete the illusion of real 3-dimensional hearing. (The idea of multiple channels wasn’t that new. As early as the 1930s, Bell Labs engineers had conducted live tests with the Philadelphia orchestra and concluded that three microphones and three playback channels across the front were the minimum to properly convey a reasonably realistic reproduction of the orchestral sound to a distant location–the tests were live, using three telephone lines, because there was no way at the time to simultaneously record three channels of sound.)

Multi-miking, Multiple Channels
Advances in tape recording in the 1960s that permitted four recording channels with four microphones allowed music producers and musicians to assign individual instruments or vocalists or groups of instruments to separate channels, and a recording engineer at a mixing console to adjust the relative levels, blend and contributions of each musician and singer. Multi-track machines proliferated with as many as 24 or more individual channels, enabling individual microphones and channels separately assigned to virtually every performer. Much of the actual creation of the recording happened later on in “the mix”, when producers adjusted all the channel levels for balance and stereo placement across an imaginary soundstage. Classical music producers went overboard with multiple microphones, often using “highlight” mikes for weaker instruments that would be spotlighted (increased in volume) during the subsequent mixdown to two stereo channels. The result was often a well-balanced but 2-dimensional sound to the stereo presentation. (Lots of modern pop and rock studio recordings continue to be recorded and mixed this way and some aficionados view the results as “multiple mono” because the placement of individual instruments and singers, miked separately, is controlled by a “pan pot” that electrically places the musician at a specific point in the stereo soundstage.)

As listeners became more critical and desirous of spatial aspects missing from many recordings, new “purist” microphone techniques evolved, often utilizing three spaced omnidirectional microphones, a pair of crossed cardioid mikes, or a coincident stereo mike with adjustable capsules located about 15 feet above a band or orchestra. Sometimes an additional pair of mikes were positioned halfway back in a hall to pick up delayed ambient reflections. The “minimalist miking” approach proved popular early on with engineer Bob Fine of Mercury Records, and later with audiophile labels like Telarc, Opus3, Reference Recordings, Bis, Chesky, Sheffield Lab, and Mapleshade. The resulting discs were (and still are) very popular with audio enthusiasts because they seem to have a natural spatial quality and a very direct unprocessed sound. The placement of musicians occurs naturally in the stereo soundstage depending on their physical location relative to the microphones, adjusted before or during the recording the session, and in most cases it can’t be “fixed in the mix” later on with a pan pot.

Commercial Movie Sound
It was, however, the advances in commercial cinema sound’s experiments with multi-channel recording/playback, first with six-track magnetic film, but later propelled in the 1980s by Dolby Labs development of Surround Sound that was the catalyst to more realistic recordings and soundtracks. Even with the early analog matrixed Dolby four-channel playback, it became clear that audiences loved the added realism that came with “surround sound” ambience directed to them from speakers on the side walls and rear of the theater. The third dialog channel was added at the front and digital recording and processing technology eventually yielded the ability to record and play six channels (Dolby Digital 5.1) in movie theaters, then in the home. The enhancement of spatial realism and directionality was undeniable, and it wasn’t long before the recording and mixing techniques became popular with popular and classical record producers. While multi-channel DVD-Audio and SACD recordings proved to be a commercial non-starter for mainstream acceptance, critical listeners appreciated the heightened realism possible with multi-channel playback. Sophisticated decoding algorithms from Dolby (DPLII and its descendents), dts (Neo:6, etc.), and Lexicon (Logic7) proved to bring greatly enhanced realism when the spatial recovery was properly reproduced from side and rear surrounds.

Six or Eight or More?
With current elaborate multi-channel formats from Dolby and dts supported by Blu-ray enabling even more channels for height and other directional cues, the future seems limited only by production budgets and practical considerations in the home. Most listeners would acknowledge that six or eight channels (5.1 or 7.1) seem sufficient to supply most of the spatial and directional cues of our live music experiences or movie soundtracks.

Here at Axiom, in our ongoing program of loudspeaker development and double-blind listening tests, we’re confident that our best loudspeakers are exceedingly neutral and accurate in realistically reproducing the sound of familiar (and exotic) instruments with no added tonal colorations. Played over the M80s, a well-recorded piano sounds uncannily like a real piano, and so do trumpets, trombones, French horns and male and female singers sound like the musicians or singers are in the living room (or you are in the concert hall or club, depending on the acoustic perspective of the recording). From my early days as a little kid in the 1950s listening to my dad’s one-channel big corner-horn speaker system, the progression in playback realism to an Axiom 7.1-channel home theater system reproducing multi-channel music is enthralling and endlessly rewarding. Great music of all kinds beautifully reproduced in the home is one of the luxuries of modern life.

Home > Latest > Articles > Loudspeakers > How Many Audio Channels are Enough?