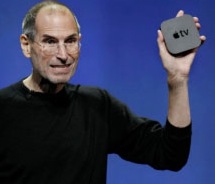 Steve Jobs called Apple TV a "hobby" but I was disappointed. Here's why.

Okay, before I get accused of being haters let me first say there were a lot of cool things introduced at the Sept 1st event in San Francisco like high dynamic range photographs, Ping which will add a nice social dimension to iTunes, and the new slimmer, iPod touch with all the features of an iPhone 4 (minus the phone) looks good. You can see Retrovo's coverage of the announcements here.

The new Apple TV on the other hand, which we hoped to be so much more, unfortunately, delivered so much less. We admit it's a cute gadget and for $99 might be fun to have to connect your TV to the Internet as well as put content from your computer on your TV screen but there are probably better options for connecting your TV.

It's Up to Google

At their recent developer's conference, Google brought out some industry chiefs to endorse Google TV. If we are going to see a wide selection of apps on our living room HDTV sets, it looks like it will have to come from Google unless Apple changes course. Samsung is developing their own TV app platform but we don't see how they could come close to the number of Android apps that would show up on Google TV-equipped sets.